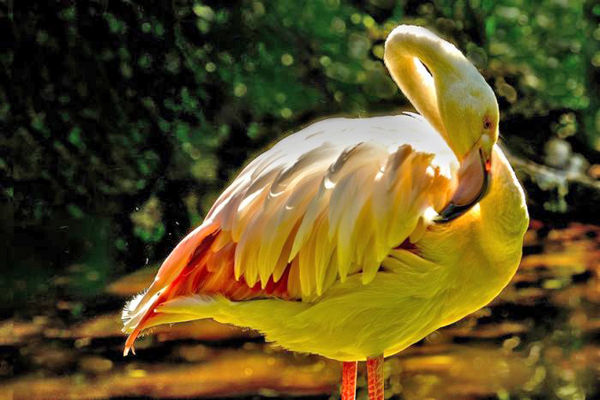 The greater flamingo is a similar species to some of the flamingo bones found at Alcoota, 250 kilometres north west of Alice Springs. Supplied: Brian Cartwright.

The red sandy desert in Central Australia was once home to majestic birds that are now synonymous with South America, parts of Africa and Asia.

Only five flamingo bones have been found at the Alcoota fossil site 250 kilometres north east of Alice Springs according to Dr Adam Yates, senior curator of Earth Sciences at the Museum and Art Gallery of the Northern Territory who is the lead palaeontologist at the site.

The most recent flamingo bone was discovered by Dr Yates in 2015.

“The earliest one that I know of is a bone that ended up in the Museum of Victoria. So that would have been collected in the 1970s by the expedition run by Tom Rich and Mike Archer.

Despite never finding a complete skeleton, Dr Yates was confident the specimens were from two separate species of flamingo.

One specimen is only three-and-a-half centimetres long and is the top of a long and thin foot bone.

“There are some anatomical features of it that are quite distinctive.

The structure was typical but the shape varied depending on the bird.

“This particular rather sort of shark fin-shaped one that’s a bit lower than the ankle joint is very distinctive for flamingos. We’ve actually found bones of two different species that are two distinct sizes.

“So it’s probably the same species but we can’t be 100 per cent certain of that because we found so little of it.”

Dr Yates estimated flamingos lived in Central Australia between 23 to 25 million years ago when the climate was much wetter.

“Although we haven’t found a lot of flamingos, the fact that there are any flamingos at all tells us that there were definitely shallow lakes or very wide flat pans that were full of water at least some parts of the year, enough to bring flamingos in,” he said.

The pink colouring of modern flamingos came from eating crustaceans which were still present after rain in Central Australian waterways.

“Brine shrimp are not a rare thing. If you go to some of the salt like salt pans, clay pans after a big rain you’ll find that they can fill up with brine shrimp very quickly,” Dr Yates said.