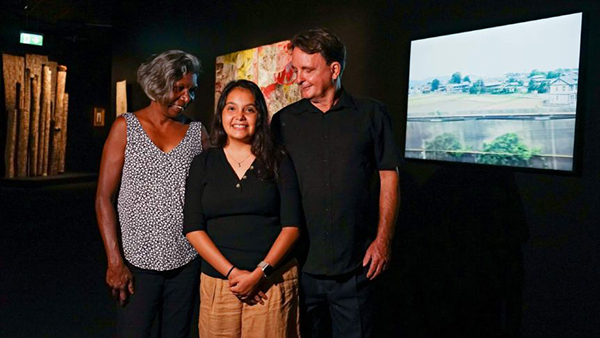 Yolngu artist Siena Stubbs was honoured for a video artwork she made while mourning the death of her grandmother.(ABC News: Michael Franchi).

An 18-year-old photographer from Arnhem Land has become one of the youngest winners in the 37-year history of the nation’s most prestigious Indigenous art awards.

“I’ve been coming to this ceremony for a very long time now, and to see my artwork being recognised is very shocking, but I’m very proud,” she said.

The teenager — who is also a children’s book author and a recent finalist for the Northern Territory Young Australian of the Year — won the honour for a poetry and video artwork she filmed on a bullet train in Japan.

Ms Stubbs was on a school trip when she made the artwork and was also mourning the recent death of her grandmother.

“You just got to sit there and reflect on everything that’s happened, and up to that point I’d been rushing, rushing, rushing and this was my chance to stop and actually think,” she said.

“My grandmother’s just died, I’m about to finish school and go out into the world, and what am I meant to do?

“Time sort of slowed even though I was going 300 kilometres per hour on this train.”

Judges praised the work for its intriguing perspective and humility. 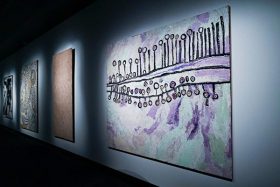 There were 65 finalists in this year’s awards and artists from South Australia, Western Australia and the Northern Territory dominated.(ABC News: Michael Franchi).

Ms Stubbs urged other young artists to express themselves through their work, instead of worrying about how it would be perceived.

“[Young people think], ‘I have to have a meaning or I have to do something that has impact,'” she said.

“The way that I always have found myself creating art is doing things that I love and trying to show people how I see the world.”

The winners of the seven categories were chosen from a pool of 65 finalists dominated by artists from the Northern Territory, South Australia and Western Australia.

Wangkajunga and Walmajarri artist Ngarralja Tommy May claimed the major $50,000 Art Award for his piece Wirrkanja, in a unanimous decision by the judging panel. 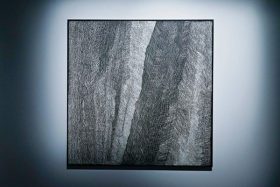 Wirrkanja is the major winner of this year’s NATSIAAs.(ABC News: Michael Franchi)

“He draws his inspirations from stories of his people who have passed and also keep that story going,” said Lynley Nargoodah, a friend of Mr May who interpreted and spoke on his behalf.

It was welcome news for the artist, who has entered the awards numerous times.

“Been painting for too long and all the other artworks didn’t win.”

The judging panel said the pool of finalists was particularly high calibre, and drew special attention to emerging artists alongside the three winners younger than 30.

“We were united in our agreement [on] how excited we were at the mix of young and emerging artists whose work won the different categories, as well as the senior artists who are the masters in their own mediums,” said judge and Darwin-based artist Karen Mills.

“[The emerging artists] represented a very strong direction of the future going forward for Aboriginal and Torres Strait Islander art.”

The head of the Museum and Art Gallery of the Northern Territory, where the works are exhibiting, was similarly impressed, and said the institution’s board was considering buying 10 works instead of the usual four to six.

“It is always exciting when the artists get that call and certainly when they get a call being told they’re a winner, they love that,” MAGNT director Marcus Schutenko said.

“Being told that their work has been acquired by a major collection is also really exciting for them.

“There are a lot of emerging artists and early career artists who we think are quite spectacular this year, and we think that’s a higher focus than usual.”

While Ms Stubbs was able to attend the Darwin ceremony in person, Mr May — and most of his fellow prize-winners — were unable to because of the coronavirus pandemic.

It meant that for the first time since the inception of the awards nearly four decades ago, the ceremony took place online. 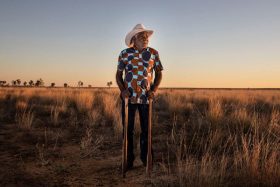 The changes also prompted organisers to set up a virtual exhibition closely modelled on its physical counterpart.

“The two shows mirror each other quite exactly, it’s a virtual space that you’ll be able to physically move through,” MAGNT’s assistant curator of art Clare Armitage said.

“One of the most exciting things about developing the online show this year was thinking about how we might be able to do it for other exhibitions and continue to make shows more accessible.”