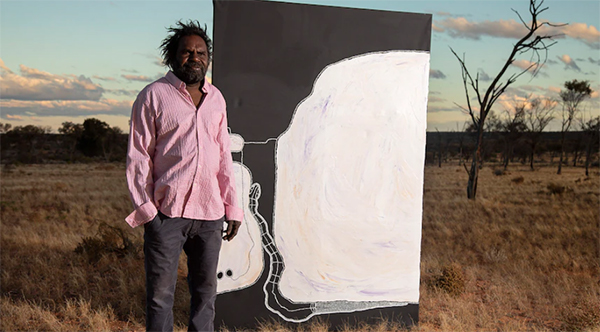 Timo Hogan with his painting Lake Baker claimed the art award at the 2021 NATSIAAs. Supplied: MAGNT.

A remote Western Australian artist has won the major prize at Australia’s most prestigious Indigenous art awards with a bold painting paying homage to a sacred site on his father’s country.

The piece, which was painted using a palette knife, depicts Lake Baker and tells of the creation story behind it.

“My father showed me the Tjukurpa (creation story) when I was a boy.”

He added that the site was highly sacred but he could only tell part of the story.

Mr Hogan is from the remote community of Tjuntjuntjara, about 650 kilometres northeast of Kalgoorlie in Western Australia’s Goldfields-Esperance region. 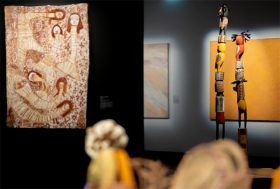 Some of the finalists’ artworks on display at the MAGNT.(ABC News: Che Chorley).

The artist, aged in his late 40s and one of the awards’ youngest finalists, said he felt honoured to have won the awards’ main prize.

“I am very happy to have won this award. It makes me feel strong inside,” he said.

“Painting is important for Anangu to tell their stories.

“I’m happy for this prize and that people see this work is important.”

The judging panel described Mr Hogan’s work as a “masterful painting of international calibre” and said it showed him as a “remarkably confident artist with talent that exceeds his age and experience”.

The seven winners of the 2021 NATSIAAs, who were selected from a pool of 68 finalists short-listed from an overall 248 entries, were from the Northern Territory, Western Australia and Queensland. 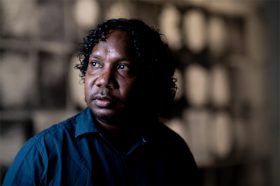 The works on paper category winner was the late Ms M Wirrpanda, a Yirrkala artist who died just two weeks after finishing her intricate fibre-tipped pen on paper piece Untitled.

Her grandson Ishmael Marika – also an artist who entered the awards – accepted the prize on her behalf.

“She was thinking about her childhood time when she went collecting oysters and shells, and in her mind (she) was going out hunting … so she had to create that, put that into the paper,” he said.

“Two weeks later, she passed away. And this is what she did.”

Tiwi Island artist Pedro Wonaeamirri, whose work won the multimedia award, said painting was a way for him to connect with his culture.

“Winning the award for this year’s NATSIAAs, I feel very strong, happy and very proud of myself,” he said.

“As an artist, singer, dancer, I am very proud of my culture.”

All of the finalists’ artworks have been exhibited at the MAGNT, where they will remain on display until February. 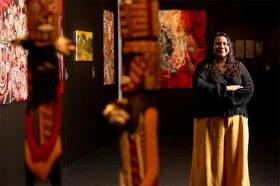 MAGNT curator Rebecca Raymond praised the standard of work of all the finalists in this year’s NATSIAAs.(ABC News: Che Chorley).

MAGNT Aboriginal art and material curator Rebecca Raymond said the finalists’ works were of a very high calibre, which was especially impressive given the impact the COVID-19 pandemic had on artists.

“I think the standard of work is … phenomenal,” she said.

“These new works are produced by some of the talented Aboriginal and Torres Strait Islanders across the country, and it’s a testament to their creativity and resilience that they’re able to create works in these COVID times.”

With the COVID-19 pandemic still a concern for Indigenous communities across Australia, the 2021 NATSIAAs award ceremony was held online for the second year running.

Organisers have also again set up a virtual exhibition that allows anyone to view the works online as displayed at the museum, and in a new feature, spectators will be able to use augmented reality to see any work in 3D in their own space. 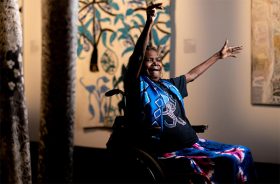 MAGNT director Marcus Schutenko said organisers had once again embraced virtual platforms to showcase some of Australia’s best Indigenous artworks to as wide an audience as possible.

“Together, we continue to illuminate some of Australia’s most talented Aboriginal and Torres Strait Islanders and their compelling breadth of artistic practice,” he said.