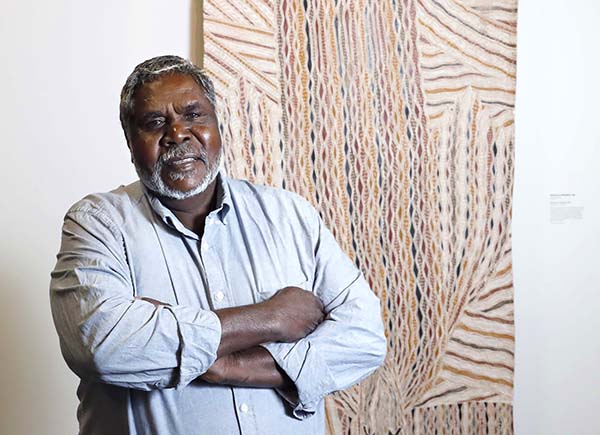 Djambawa Marawili AM with his work Journey to America. Photo © Fiona Morrison.

His winning stringybark painting is a reflection on his recent travels in the US spreading Yolŋu philosophy.

Yolŋu artist Djambawa Marawili AM has been announced as the recipient of this year’s $50,000 Telstra Art Award. From the Yilpara in East Arnhem Land, Marawili was selected the overall winner of the Museum and Art Gallery of the Northern Territory’s Telstra National Aboriginal & Torres Strait Islander Art Awards (NATSIAA) for his stringybark piece, Journey to America. Selected from 280 entries and 68 finalists, the work is a meditation on Marawili’s recent travels in the United States spreading Yolŋu philosophy. Made from natural pigments, the work depicts five different states of water in Blue Mud Bay, located on the eastern coast of Arnhem Land, as well as the Statue of Liberty. Marawili previously won a NATSIAA prize in 1996, also for a bark painting.

“The scale is remarkable, and Djambawa Marawili’s virtuosic use of natural materials and intricate and complex brushwork, honed over decades of dedicated practice, creates dynamic flows and movement across this immense bark,” said the judges. “The personal narrative within the work articulates his leading role in sharing Yolŋu philosophy with the world.”

“Congratulations to Djambawa Marawili AM on such an exemplary and expressive artwork,” said MAGNT Director Marcus Schutenko. “This year, MAGNT received such an impressive selection of high-calibre artwork from across Australia and Mr Marawili’s artwork is a clear reflection of this. We are delighted to share the stunning array of thought-provoking artwork in our Telstra NATSIAA exhibition, accessible for all to see and experience.” 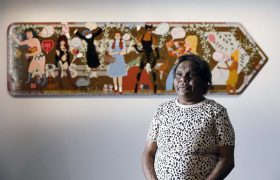 Six other NATSIAA winners have been announced, with each artist receiving $5000 each.

Nyapuru (William) Gardiner is the posthumous winner of the Works on Paper Award for his panoramic landscape Our Old People. Over three metres long, it recalls the artist’s time working on pastoral stations in the Pilbara and the Kimberley.

The Bark Painting Award went to Noŋgirrŋa Marawili, from Yirrkala in the Northern Territory, for Lightning Strikes, a depiction of the ancestral lightning strike on the Madarrpa clan estate of Baratjula.

The Wandjuk Marika Memorial 3D Award has gone to Malaluba Gumana for her work Rainbows in the Lilies. Also from Yirrkala, Gumana’s work features the crosshatching technique marwat, which she is considered the foremost exponent of.

Titus Nganjmirra from Gunbalanya in Western Arnhem won the Emerging Artist Award for his work Queen Elizabeth, a portrait of the Queen as she appears on banknotes. This is juxtaposed with the first flag to be planted on Australian country and cultural images of the Nayuhyungki stone country beings.