You are here: Home » Articles filed under: 'News' » Article: 'MAGNT’s Marcus Schutenko on' 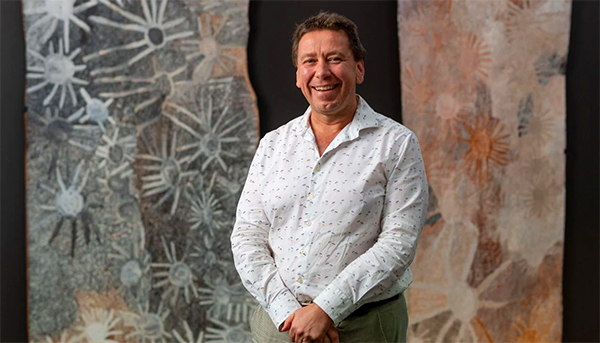 Bridget Cormack, That NT ‘giving it a go’ attitude, The Australian, 10 July 2020

Marcus Schutenko is Director of the Museum and Art Gallery of the Northern Territory. In his late twenties, he delivered pizzas for Toto’s on Lygon St to subsidise his freelance theatre work.

The MAGNT was the second to last major gallery to close due to COVID-19 and the first to reopen. Are people coming back?

It’s quite a strange thing because now we’ve just hit July, the busiest month of the year for tourists, but the tourists aren’t here because the borders are closed. I’m looking out at the car park which on any normal July day I would see filled and it’s probably only at 20 percent.

How did Yolngu painter and printmaker Nyapanyapa Yunupiŋu become the first Aboriginal artist to be the subject of a solo exhibition at the gallery?

Traditionally Aboriginal people think of their community before themselves, and we’ve traditionally presented Aboriginal work in that way, as the art of a group. But as the ecology around Aboriginal art is becoming much stronger and more international, Aboriginal artists have been putting their hand up to be acknowledged as great artists by themselves. Nyapanyapa’s exhibition looks fabulous and we’re making an online version for those people who can’t travel to the territory by October 25.

Nyapanyapa Yunupiŋu lives and works in East Arnhem Land. What can be said about the art being produced in this region more broadly?

The art that’s coming out of East Arnhem Land at the moment is mind-blowing. Anybody who is passionate about Aboriginal art and has the financial means is flying to Yirrkala to look at the Buku-Larrnggay Mulka Centre. There’s an incredibly strong community out there who have been encouraging each other and pushing each other and taking Aboriginal art in directions that continue the traditional storytelling but find a contemporary way of telling it, which is what’s so beautiful.

What was the hardest thing to adapt to in the Territory when you moved to Darwin from Melbourne to take up this job in 2015?

Up north there’s less formality and that leads to a great give it a go attitude, support anyone giving it a crack. There are very few naysayers and that’s quite refreshing. Sometimes people start projects and initiatives without having talked to all the people they might want to have before giving it a crack [laughs]. You don’t want to dampen people’s enthusiasm but sometimes you ask ‘well have you chatted to so and so?’ and they say ‘no!’. And it’s like, ‘Why not? It will totally impact them’.

Where should people visit in the NT when the borders reopen?

Litchfield National Park is incredibly popular with locals. Everybody has heard of Kakadu National Park but Litchfield is almost as beautiful and can be done in a day trip. There are a few different waterfalls to have a swim underneath and it’s definitely something that a lot of Territorians did, as soon as restrictions started to ease and Litchfield reopened.

You’ve had quite a varied career in arts administration. As a teenager growing up in Melbourne’s outer east what did you dream about?

Performance, theatre, film. I spent my twenties and early thirties working in that space. I had a teacher in Grade Three and Grade Six and he used to get involved in the local amateur theatre company. My mum wanted me and my brother exposed to cultural things and I would be dragged kicking and screaming to see theatre once a month and then be raving about it the whole way home in the car. In Grade Six I was in my first play, with my teacher who I had seen in plays. That’s what got me going. As a quiet nerdy child, being given the opportunity to hop on stage really pulled me out of my shell and I fell in love with performance.

The moment eternal: Nyapanyapa Yunupiŋu is showing at MAGNT until October 25.