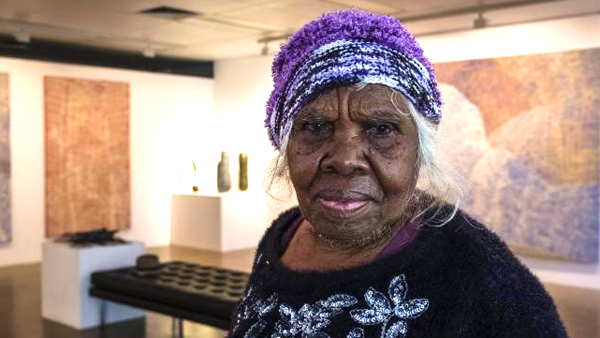 Eunice Napanangka Jack at the opening of her new exhibition, Kuruyultu, at Outstation Gallery in Darwin. Picture: Amos Aikman.

Eunice Napanangka Jack was a young girl when she left Kuruyultu, a sacred place of rocky plains and flaking outcrops, deep in the Western Desert, where ancestral beings continue to tread. Nowadays she returns there in the guise of a “wallaby woman”, painting to record what she sees. Back when the 84-year-old was a youngster, she clung to her mother’s back and listened to her father, Tutuma Tjapangati, tell stories about the country as he led the family hundreds of kilometres to Haasts Bluff, lured by the promise of flour, sugar and tea. Later they continued to Papunya, about 245km west of Alice Springs, where they found their unexpected place in history.

Papunya was heady in those days: proud Pintupi, Luritja, Warlpiri and Anmatyerr tribesmen arrived from the desert had swelled the population (today below 500) to more than 1000 people by the beginning of the 1970s. Local white folk fulfilled the adage that only missionaries, mercenaries, misfits and madmen willingly work in remote communities. Parties involving “filling a seven cubic foot freezer with beer on a Saturday night and drinking it” were common, according to reports of the time. Visiting “flagon wagons” and high infant mortality rates gave Papunya the reputation, some say unjustified, of a lawless outpost.

Out of this brew grew a germ of what critic Robert Hughes famously described as “the last great art movement of the 20th century”: Aboriginal painting.

Last month, the Museum and Art Gallery of the Northern Territory opened its long-awaited exhibition of early Papunya boards. The show’s 128 works, drawn from a collection of more than 200, chart the beginnings of the Western Desert art movement. Entitled Tjungunutja, translated as “from having come together”, the show, and an accompanying film by David Nixon, retraces what happened in what writer John Kean, a longtime associate of Papunya Tula Artists, describes as the “efflorescent” atmosphere of the Papunya men’s painting shed in 1971 and 1972.

Aboriginal and non-Aboriginal cultures commingled. Senior men from language groups that otherwise might not have met socially competed to show off their Tjukurrpa, or Dreaming stories. Ceremonial leaders experimented with designs borrowed from ground and body art and ritual paraphernalia on two-dimensional industrial surfaces such as Masonite. Outsiders influenced the painters as they saw fit. What emerged were about 1000 extraordinary, enigmatic pieces by about 30 artists. MAGNT’s collection is seen as particularly significant because it contains some of the earliest boards. By historical accounts, the painting shed was closed to most people not involved with the production process. 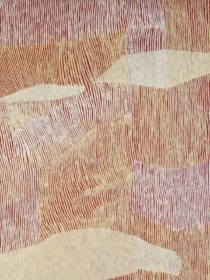 “When they came to Papunya, they learned that the designs they were making on the ground could be painted on to boards,” Yuyuya Nampitjinpa, a sister of one of the artists, says in Nixon’s film. “They understood that painting was a way to share. They began to see that they could paint their stories. That’s how they started sitting down (and) painting. They’d finish it, and the whitefella would take it away — he’d take them into town, get the money and bring it back.”

Around Tjungunutja’s darkened gallery, some of the works are figurative; others seem methodical or religious, even phallic. Many look like progenitors of the desert dot painting style. New York University professor of anthropology Fred Myers, who spent time with Papunya artists in the 70s, says the earliest boards reveal the men “making it up”, figuring out how to use and balance space and represent their world in a new way.

The apparent familiarity of these works testifies to their creators’ influence over subsequent generations of painters. Myers believes the old men developed a technique he calls “doubling”, in which a pattern can represent two things simultaneously — perhaps a sacred design and a feature in the landscape.

“I think there’s an aesthetic pleasure in putting it together,” Myers says. “Some of the men also liked playing on the edge of what was dangerous: they used to say to me, ‘This is dangerous, but I can handle it.’ ”

Controversies soon made clear that certain old lawmen had pushed the boundaries of acceptability in Aboriginal society by revealing secrets through art. Some felt that doing so was their right; others appear not to have considered the possibility that a painting sold out of the community could return and perhaps harm women and children. The uncertainty helped to cast MAGNT’s collection into a penumbra, where it remained until a bizarre theft in 2008 triggered a decade-long process to conserve the boards and identify those suitable for public display.

Sid Anderson, a traditional owner who has worked as a cur­ator on Tjungunutja, says it profoundly affected him. “The first time I saw those paintings, it was like some sort of spirit coming in and touching my heart and my mind,” he says. “They show our country, our ceremonies … they’re really important for people to see and understand.”

Even so, much remains veiled, perhaps out of necessity.

MAGNT’s curator of Aboriginal art, Luke Scholes, designed Tjungunutja in collaboration with a group of surviving artists and their relatives. Credit for the Papunya painting movement is often given to schoolteacher Geoffrey Bardon, who began buying works and tutoring artists in the early 70s. In Scholes’s catalogue essay, Bardon emerges as an erratic figure with “somewhat extreme views”, according to Myers, and an imperfect memory. ­Scholes argues that the bureaucrats and welfare agencies Bardon despised and later maligned were, in fact, trying to help him. “This revised history acknowledges the agency of other non-indigenous people who have thus far largely been omitted,” Scholes writes. He goes on to urge sympathy with Bardon as “a man battling with his own tragic circumstance”, but concludes even his own thorough research fails to illuminate the actions of more than a handful of artists, leaving most “largely invisible”.

Prominent in the exhibition is a recent acquisition by MAGNT: a double-sided board painted by Tjapangati, Napanangka’s father, in Septem­ber or October 1971. In his writings three decades later Bardon said: “This striking painting … was painted for me at the beginning of the Papunya painting movement … from this first work I was able to decipher many approaches to Aboriginal art.”

Scholes describes it as the “gateway painting” that caused Bardon to realise the artists were not just making decorative patterns.

“The artists were showing their country, their stories, their ceremonies,” Anderson says. “But I think people not connected to that land will only see painting.”

Michael Nelson Jagamarra, whose work inspired the famous mosaic outside Parliament House in Canberra, agrees it is unlikely outsiders could or should try to understand the Papunya boards entirely. “It’s very hard,” he says.

In Nixon’s film, old painters and their relatives couch their conversations in the need to earn money and pass on stories. For those living in a culture with few means of formally recording knowledge, holding and transmitting information is a life’s work. Perhaps, then, the key to appreciating the value of these and other paintings to their creators lies in understanding how they are used.

After two decades spent helping her father and husband paint, Napanangka took up brushes herself in the early 90s, one of a group of women to do so in what Myers describes as the second wave of the Papunya Tula art movement. For years, she painted mainly her mother’s stories. Then, while preparing for Tjungunutja, Scholes visited Napanangka to discuss appearing in Nixon’s film and showed her a picture of her father. Afterwards, she experienced what seems like a revelation.

“My ngangkari (protective spirit) was talking to me through my father and grandfather, and he was reminding me not to forget about the wallaby woman and that place (Kuruyultu),” Napanangka recalls. “It reminded me that I should think about that time and paint it.”

Eighteen months’ feverish production ensued, leading up to a solo exhibition, Kuruyultu, which ended last week at Darwin’s Outstation Gallery. Chrischona Schmidt, co-ordinator of Ikuntji Artists in Haasts Bluff where Napanangka paints, says the works are of a new style. The story of the wallaby mother and daughter is part of a songline stretching across much of the Red Centre. “My grandfather speared a wallaby at Kuruyultu. That night he ate that wallaby. At the same time my mother could feel me moving inside her,” Napanangka says. “She was heavily pregnant with me. That next morning, after my grandfather had speared the wallaby, killed it and eaten it, I was born.”

Kuruyultu was her grandfather’s and father’s country before it was hers. In being born, she became the wallaby woman and acquired responsibility for preserving and retelling that part of a longer story. She has a birthmark on her hip marking where the spear struck.

Napanangka says she travels to Kuruyultu as the wallaby woman and paints the landscape as she sees and remembers it. After completing a work, sometimes she dances. In her canvases, she sees her songlines and stories but, asked whether someone else could recognise them, she is unsure. Her paintings are not literal transcriptions but mnemonics. “It’s important to hold that songline and the connections with the Dreaming as well,” she says.

Jeffrey Zimran Tjangala, a young man who consulted on Nixon’s film, jokes that it’s “just not that easy talking to old people. Sometimes they can take you somewhere else (other than where you expected to go) … but with their stories, it’s really special.” Zimran says the work “opened my mind”.

The film holds its breath for much of the 90-minute playtime, then releases a climactic exhalation by Raymond Maxwell Tjampitjinpa, son of respected artist George Tjangala: “We’re holding this country, this Ngintaka Tjukurrpa (Perentie Dreaming). That’s how it is,” Tjampitjinpa says. “I remember when I was a young boy, those old men doing their paintings on boards, making paintings … as I grew older, I started to understand that knowledge.

“The painting movement got bigger and bigger, people making paintings, making them all the time. I also learned what my father taught me to hold on to his story, to paint it and hold it … that place, Ngintaka Tjukurrpa … I’m telling you now this is how we are. I am holding his country strong. It’s important. This is how we understand it.”

Tjungunutja is at the Museum and Art Gallery of the Northern Territory, Darwin, until February 18.