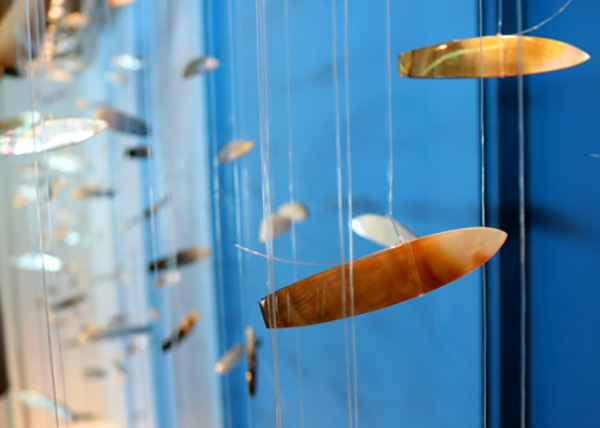 Art installation created by artist Tokainiua Devatine, currently on display at the Museum of Tropical Queensland.

In 1790, HMS Pandora sailed out of England with a clear mission: to find the HMS Bounty and its 25 mutineers. Pandora reached Tahiti in March 1791, and captured 14 of the mutineers, restraining them in the makeshift prison cell on the stern deck, ‘Pandora’s Box’. Leaving Tahiti in May 1791, Pandora spent the next several months searching for the remaining mutineers on other islands in the South-West Pacific, including Samoa, Tonga, Rotuma and Tokelau. On the eventual journey home to the United Kingdom in August, after failing to track down the nine other mutineers, Pandora ran aground and sank whilst attempting to traverse the Torres Strait.

The wreck remained undisturbed until 1977. Upon discovery of the shipwreck site, the Queensland Museum conducted several archaeological expeditions between 1979 and 1999. The extensive excavations unearthed a significant amount of the buried ship’s hull, as well as the well-preserved collection of artefacts now held by the Museum of Tropical Queensland in Townsville.

When Pandora sank, so did almost everything on board the vessel. The Queensland Museum team uncovered a large assemblage of artefacts that shed light on the everyday lifestyle on board the ship during its eventful journey, as well as a range of Polynesian artefacts that the crew had collected whilst on the islands.

MA8098 Fishing/trolling lure component. Discovered at the Pandora shipwreck in the 1980s-1990s.

Among these Polynesian objects were a collection of fishhooks and shanks made from mother of pearl shell. Research on the collection deduced that the shell shanks, in particular, were parts of fishing lures used for trolling bonito fish. When suspended in water during use, the lures resemble small fish moving in the water, and attract the predatory bonito. After over 180 years underwater, the other distinguishing features of the lures – the hook and plant fibres – disintegrated prior to discovery of the wreck. The shanks, therefore, cannot be linked to one particular area, as this kind of lure was not only common in French Polynesia, but in a variety of regions across Oceania. They came in a variety of forms, colours and sizes, depending where they were manufactured.

Currently on display at the Museum of Tropical Queensland is the display, ‘Making Connections: French Polynesia and the HMS Pandora collection’. As part of the display, artist and anthropologist Tokainiua Devatine created an art installation inspired by the many pearl shell shanks from the Pandora wreck. In his artwork, Tokainiua aimed to represent the variation in the pearl shanks, displaying different sizes, colours and forms of the shell pieces in his interpretive artwork.

People in French Polynesia still use bonito lures made from mother of pearl shells to catch bonito fish. Although, today metal hooks and synthetic fibres are used on the lures, instead of the natural fibres and shell or bone hooks used when the Pandora’s crew acquired the lures.

People in French Polynesia still use bonito lures made from mother of pearl shells to catch bonito fish. Although, today metal hooks and synthetic fibres are used on the lures, instead of the natural fibres and shell or bone hooks used when the Pandora’s crew acquired the lures.

Alongside the pearl shanks found on the Pandora wreck site were several pearl fishhooks. Fishhooks used in French Polynesia at the time of Pandora’s journey through Oceania also came in a variety of shapes and sizes depending on their intended use and associated region. Locals would frequently include the hooks in trade and exchange practices, and European visitors to the islands avidly collected them in the 1700s.