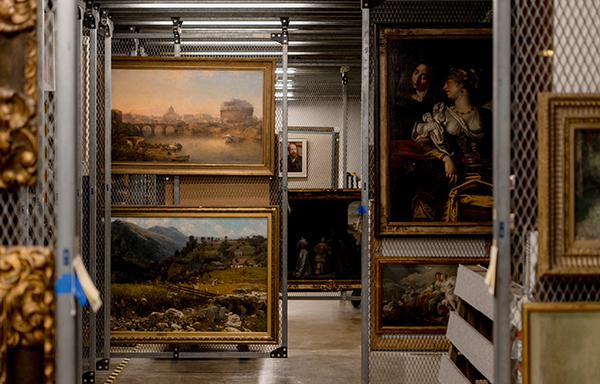 With storage spaces filled with works that may never be shown, some museums
are rethinking the way they collect art, and at least one is ranking what it owns.

Fueled by philanthropic zeal, lucrative tax deductions and the prestige of seeing their works in esteemed settings, wealthy art owners have for decades given museums everything from their Rembrandts to their bedroom slippers.

It all had to go somewhere. So now, many American museums are bulging with stuff — so much stuff that some house thousands of objects that have never been displayed but are preserved, at considerable cost, in climate-controlled storage spaces.

In storage at the Brooklyn Museum: a roomful of home décor textiles, a full-size Rockefeller Center elevator and a trove of fake old master paintings the museum is barred from unloading.

Some collections have grown tenfold in the past 50 years. Most museums display only a fraction of the works they own, in large part because so many are prints and drawings that can only sparingly be shown because of light sensitivity.

His museum was so jammed with undisplayed artwork that it was about to spend about $14 million to double its storage space until he abruptly canceled the plan.

Instead, it embarked on an ambitious effort to rank each of the 54,000 items in its collection with letter grades. Twenty percent of the items received a D, making them ripe to be sold or given to another institution.

The Indianapolis Museum of Art has ranked its collection with letter grades to determine which works may be a drain on resources. Which one do you think got an A?

Not long ago, such ratings would have struck many in the museum world as crass. But Mr. Venable is now at the vanguard of a growing number of museum directors who are taking a hard look at how much they have and how they collect art because they fear a history of voracious stockpiling and the pressure to acquire still more is creating a crisis for American museums.

“It doesn’t benefit anyone when there are thousands, if not millions, of works of art that are languishing in storage,” said Glenn D. Lowry, the director of the Museum of Modern Art. “There is a huge capital cost that has a drag on operations. But more importantly, we would be far better off allowing others to have those works of art who might enjoy them.”

MoMA regularly culls its collection and in 2017 sold off a major Léger to the Houston art museum. Yet, it too is in the midst of yet another costly renovation (price tag $400 million) to be able to exhibit more of its ever growing collection.

Part of the problem is that acquiring new things is far easier, and more glamorous, than getting rid of old ones. Deaccessioning, the formal term for disposing of an art object, is a careful, cumbersome process, requiring several levels of curatorial, administrative and board approval. Museum directors who try to clean out their basements often confront restrictive donor agreements and industry guidelines that treat collections as public trusts.

See: Collections have ballooned in the past 50 years.

And many still hold the view that a wholesale parting with objects can be risky. Overlooked art comes back in style. Forgotten treasures turn up. Many pieces, they argue, should be retained for scholars, regardless of how often they go on public view. And much art still needs to be acquired as museums respond to the soaring popularity of contemporary art and aim to integrate more work by women and artists of color.

“People can’t understand why museums have more than they can show at any given time,” said the critic and curator Robert Storr. “But preserving the best of the past — no matter how unpopular it may temporarily become — is the purpose of museums. They should protect their holdings; they shouldn’t jettison them for short-term gains or savings.”

But holding on to it all has consequences, most notably the pressure to build new exhibition wings. Some wealthy collectors take matters into their own hands, creating private museums to retain control of what goes on view.

Eli Broad, the philanthropist, said one reason he created his own Los Angeles museum, the Broad, was to ensure a proper display of his impressive collection of modern and contemporary art.

“I don’t see how giving art to museums that are not prepared to show a fair amount of it makes any sense,” Mr. Broad said. “Of the 2,000 works in our collection, I got the sense they would show 1 or 2 percent of the work and the rest would go in storage.”