Tim Stone, Tickets cancelled for Nitsch performance in Tasmania due to protest threat, The Art Newspaper, 26 May 2017 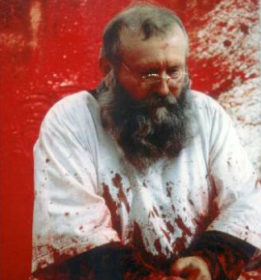 Dark Mofo, a festival hosted at the Museum of Old and New Art (MONA), announced today it is cancelling tickets to a performance by the Austrian Actionist Hermann Nitsch in Hobart next month.

Organisers cancelled tickets to the performance scheduled for 17 June after they uncovered a plot to disrupt the event. Around 200 tickets are believed to have been obtained by people opposed to the performance by the 78-year-old artist.

Concerns that protestors would be inside the venue and make up a significant portion of the audience forced the festival to take action. “The safety of the artist, performers, and audience members remains our first priority,” says Dark Mofo’s creative director Leigh Carmichael.

Despite the cancellation of tickets, Nitsch’s performance will go ahead at a new venue to be announced closer to the date.

“It’s an unfortunate situation, and we regret the inconvenience caused to those who did manage to secure tickets early, however, we need to start the ticket allocation process again,” Carmichael says.

In response to further possible protests, security will be bolstered for both the performance on 17 June and a talk with Hermann Nitsch planned for the following day. Organisers have warned patrons that both events will now be bag-free and photographic ID checks will be conducted.

Since it was first announced, Nitsch’s performance has met with a rising tide of opposition, including an online petition from Animal Liberation Tasmania that has so far garnered over 20,000 signatures.

Much of the public outcry appears to have risen from a misunderstanding that an animal will be slaughtered in front of the audience, “we will be using the carcass, the live slaughter is not what will happen,” Carmichael said in an interview with local radio station ABC Hobart on 19 April.

“For those members of the public who believe that this is no more than shock art, or a publicity stunt, we urge you to look deeper.”

Somewhat prophetically, last month, Mona’s millionaire owner David Walsh, took to his museum’s blog to encourage those opposed to Nitsch’s performance to do something about it. “So here’s my advice to you,” he wrote. “If Nitsch’s performance is wrong, get out there and stop it. It won’t be a disaster for Tassie, since it’ll just generate a few headlines and a bunch of Facebook discussion.”

He continues: “Stopping Nitsch won’t stop me doing the sort of self-serving, status-enhancing, biologically-bound good that I do through Mona. You should be protesting that, too.”

Walsh’s penchant for risky art has done much to put Tasmania on the map and kick-start an economy that was once in decline.