You are here: Home » Articles filed under: 'News' » Article: 'March for Science – Academy of Science'

March for Science – Academy of Science 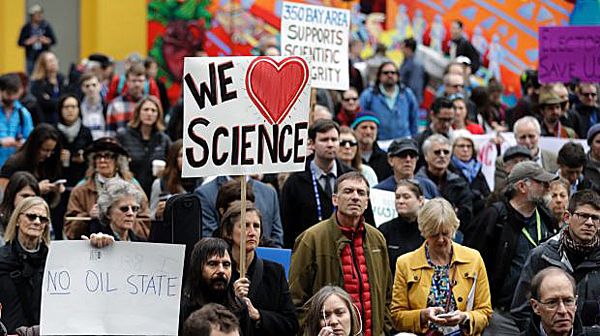 People hold signs as they listen to a group of scientists speak during a rally in conjunction with the American Geophysical Union’s meeting in December. Photo: AP.

Prominent public health advocate Simon Chapman has slammed the Australian Academy of Science, describing it as “spineless” for its refusal to endorse March for Science rallies in Australia.

April 22 – World Earth Day – will see demonstrations in 53 countries, centred on Washington DC, in response to what many perceive as US President Donald Trump’s attacks on science.

Since taking office in January, Mr Trump has ordered the removal of climate-change initiatives from the White House website and moved to stop scientific organisations, including NASA, from tracking the impacts of climate change.

In various posts to social media website Twitter, Mr Trump has vowed to dismantle the Paris climate accords and in 2012 he infamously stated that global warming was “created by and for the Chinese to make US manufacturing non-competitive”.

In Australia there will be March for Science actions in 12 cities, including Sydney, Canberra, Melbourne and Brisbane.

The secretary for science policy at the Australian Academy of Science, Les Field, told Fairfax Media: “The academy strongly supports US scientists who have established the March for Science.

“Science in Australia is in a different situation and while it is good to show solidarity with our US colleagues it’s unclear what the Australian marches will achieve.”

Professor Chapman said that the US could not be isolated from the rest of the world.

“I think their position is immensely disappointing,” he said.