You are here: Home » Articles filed under: 'News' » Article: 'March for Science – or engagement?'

March for Science – or engagement? 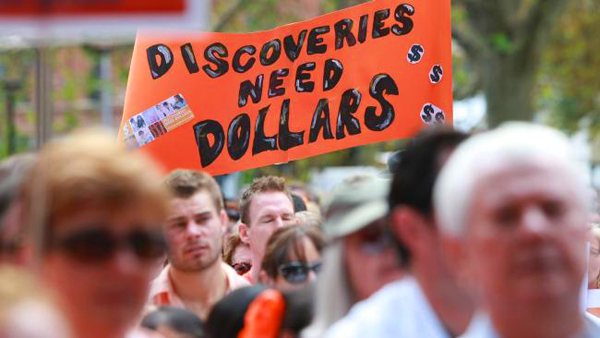 Activists should harness their energies behind a march for science engagement, not a march ‘for science’.

On Saturday, in more than 400 locations across the globe, a March for Science will occur.

The M4S is described as the first step of a global movement to defend the vital role that science plays, with diverse organisations and individuals partnering to stand up for science and for evidence. Undoubtedly there are real threats in the US, including budget cuts, censorship of data and researchers, and pressures to abolish governmental agencies with science-related mandates.

These will have worldwide impact, particularly given the prominent role played by American funding for scientific research. But what assumptions underlie a march for science and why may it be problematic?

One cornerstone of the rhetoric associated with the M4S is that it is pushback against what is described as growing anti-science sentiment or science denial. The march will present a united front that is pro-evidence.

We argue that this vision is likely to be divisive: a more productive approach would emphasise science engagement and two-way communication between scientists and members of the public, rather than seeming to promote science as a source of authority not to be questioned.

To focus on what are termed growing anti-science movements reinforces a tendency to globalise people’s reactions to science. In fact, people tend to view different issues in diverse ways. Emphasising hot-button issues and simply deeming all who take outlier positions as anti-science are misleading: for example, one may be sceptical about climate change for a variety of reasons but generally be interested in and engaged with science.

Many people base their opinions on what they view as credible evidence but source information that would not be considered as the best or most relevant evidence by scientists, in part because much of the evidence scientists produce is not directly available to the public. Hence this debate should be recast in terms of how to know which evidence should count, what its implications are, and how to recognise and mitigate bias.

The M4S also may underestimate the public’s knowledge in relation to scientific matters, such as everyday and indigenous understandings of the world that make critical contributions to the advancement of knowledge. As a recent petition from indigenous scientists and community members stresses, there is not just one science but multiple ways of seeking out knowledge in a systematic manner to understand our world, better our lives, and preserve our environments and cultures.

Some of the rhetoric associ­ated with the M4S tends to mischaracterise science as a body of truth quarantined from economic, political and social forces, rather than a certain type of method or way of knowing that must be combined with a range of values for us to make personal decisions and effective and legitimate public policy.

The truth is not simply out there. Our understandings of the world have evolved across time, often in non-progressive manner as the history of science has repeatedly shown: consider ulcers, which until recently were thought to be caused by stress rather than bacterial infection.

Merely providing more information about science is likely to backfire. This type of deficit approach has long been disproved by social scientific research.

The deficit model holds that if we provide people with more science education, they will become more supportive of science (and scientists).

Instead, research shows that providing information initially can contribute to polarisation and thus make people more sceptical or conflicted, especially about emerging technologies or complex policy decisions with scientific underpinnings.

To stress that scientists should simply be trusted similarly may create disquiet: although levels of trust in science have traditionally been high in Australia, some may view the present efforts as unjustified and even rent-seeking, and thus the M4S inadvertently could contribute to undermining trust.

We encourage scientists to develop greater knowledge about public understandings of science and their underlying sociocultural drivers through increased consultation of and collaborations with colleagues in the social sciences and humanities and members of the public.

We contend that science advocates should harness their activist energies behind a march for science engagement, not a march “for science”.

Rachel A. Ankeny and Heather J. Bray are from the School of Humanities at the University of Adelaide.