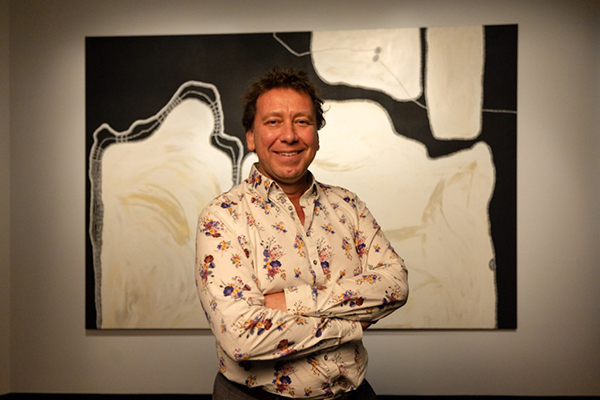 Marcus Schutenko has steered Darwin’s Museum and Gallery of the Northern Territory out of the ‘dark years’ and into an award winning future.

Marcus Schutenko admits that his career was Melbourne-centric before he headed to the Top End in 2015.

As CEO of the Museum of Chinese Australian History for three years – and prior to that working with Arts Centre Melbourne and the Victorian Multicultural Commission, coordinating festivals, as well as The Store Room Theatre – heading to Darwin to take the helm at the then-troubled Museum and Art Gallery of the Northern Territory (MAGNT), was nothing short of challenging.

‘I had worked a lot in the small to medium sector, and the challenge for me was to move into a large cultural organisation position. And on top of that, it’s a very different arts environment in the Northern Territory,’ said Schutenko, who is now moving on from MAGNT after seven years.

Those seven years entailed rebuilding staff and funding levels as well as shaping a vision that today sees a major new state gallery on the horizon. Clearly, Schutenko was up for the challenge.

Founded in 1965, MAGNT has had a pretty interesting (some would say tumultuous) history. For 32 years it enjoyed independence as a Statutory Authority, which precipitated great growth – but that sadly stagnated in 1997 when the government decided to remove that status and run the gallery under various government branches.

MAGNT’s authority status was reinstated in 2014, ten month prior to Schutenko’s arrival in Darwin. ‘And since then, we have doubled our staff over the past seven years. We have also seen funding cuts drop down to a low of $7.3 million (operational funding), which is now on track for almost $12 million delivery next year. It has been incredibly heartening to see this turn around.’

Schutenko told ArtsHub that his immediate focus was on shoring things up from the inside, and ensuring the public were getting a good outcome.

‘If you cut three quarters of the staff over 18 years, a great deal of critical failure starts to happen, so I was faced with having to build up the inside first,’ he said.

‘That first year in the job (2015), we also worked closely with Telstra to reinvigorate the [National Aboriginal and Torres Strait Island Art] Awards (NATSIAA) for 2016, and put Indigenous agency back in, with Aboriginal woman Rhoda Roberts putting performance and dance and song into the ceremony – it made it alive again!’

Schutenko said kick-starting the NATSIAA with that Aboriginal-led vision helped Darwin’s Aboriginal arts ecology come into its own over subsequent years.

Building up from the roots

Then Schutenko faced the challenge of shaping MAGNT’s next chapter. Its permanent exhibition spaces had not been refreshed in nine years.

‘Now, the last five years, we have won national awards every year. We have really invested in what we present.’

Sustaining that vision, and keeping it growing forward over the course of a directorship, requires resilience, Schutenko said.

‘What you need in a directorship is to start with vision and passion, and then to drive and bring people with you. Some directors are spectacular with that vision but they burn out. What stops the bun out, and what sustains the job? Resilience is a big part of it all,’ he explained.

‘We all have legacy to work with, to resolve before you can move forward. I had many issues from the “dark years”, and my ability to keep driving and resolving them is something I learnt.

‘Resilience comes from bouncing back and learning from it.’
Marcus Schutenko, MAGNT Director

‘The other thing that really sustains that position is relationships and support networks, and I am much more cognizant now how you nurture those internally within the organisation, and with stakeholders externally, and how you have their back across that network.

‘It is really vital if people are backing you, then you can be pushed hard and keep going because you know you have the support,’ Schutenko said.

‘My background was more performing arts, so I have often taken a theatre approach into a museum approach. But it struck me early on that theatre, by nature, is a collaborative art form. You have an immediate network there that is not apparent in the museum and gallery sector.’

While at the Chinese Museum in Melbourne, Schutenko played a pivotal role in setting up a network of like-minded museums, a strategy he took with him to Darwin.

‘Darwin forces you to think about the nation – so many people come from somewhere else; it is a city that has a turn-around of 12% of the population in any year, so you are always meeting new people. So from a Darwin perspective you feel this is a corner of Australia, where in Melbourne you are an international city.’

Milestones and MAGNT’s next giant chapter

Schutenko explains that vision takes time. Across his seven years with MAGNT he has been working on a number of milestones that will be ticked-off mid-year as he steps down.

‘We had one Aboriginal/Torres Strait Island-identified position when I arrive; we now have seven,’ he said.

‘There are many project that I have been trying to lead or push that all converge in the first half of this year. Later this month, the builder will be appointed for the new $50 million art gallery. The architects will finalise the design in May, the builder will be on board by June, and the hording will be up on the site as I depart Darwin,’ Schutenko explained.

He added: ‘I am so proud that we now have three new Indigenous art curators in our team, led by Louise Partos as MAGNTs new Assistant Director – it is a team who I have great confidence in to deliver that [new] gallery to the highest standards.’

Another great initiative cementing the organisation’s future has been the work done on embedding Aboriginal governance.

‘We are very close to unveiling our Aboriginal Advisory Board, as well as a Collection Development Strategy which is about 300 pages long at the moment – a great working document for the staff and curators to be strategic in our collecting areas rather than just, “oh, here is a great work donated to us.” That strategy is due [to be tabled] in the next few months,’ Schutenko said.

He also oversaw the refurbishment of Darwin’s Maritime Gallery, which had not been refreshed for 29 years, and which took four years of development and $2 million to happen. It was unveiled last year. Next is a refresh for MAGNT’s site masterplan in order to compliment the new State Square Gallery.

In our interview, Schutenko was at pains to commend the Australia Council for its strategic shift in focusing more on Aboriginal and Torres Strait Island culture. ‘We have all definitely benefited from that shift. The Indigenous arts sector is continually increasing its ecology of support, growing year-on-year.

‘While art centres are benefiting from that, the flipside is the socio-economic disadvantage of Indigenous artists living away from our big cities and not having access to the support cities offer. For those living out in remote areas it appears to be getting harder. And the turn-over of art centre managers is getting higher. What is going on? What is impacting that turn-over?

‘It would be great if the Commonwealth would look into why it is so hard to work in remote art centres,’ he said.

When Schutenko steps down in June, he will be moving to his wife’s home country of New Zealand. ‘I love the move, just from a big adventure perspective,’ he said.

Not committing too early to the next position, he says he wants to, ‘arrive in NZ and give it a big think.’

Schutenko added that while there is a lot of buzz and conversation around ‘The Great Resignation’ as a pandemic outcome, his choice has nothing to do with COVID.

‘Historically, people feel they need to be productive, and don’t want to leave a job until the next thing is hooked up. It can be hard to say, “I want a bit of time off to recharge”, but that is exactly what I am doing.’

Advice for his younger self?

Knowing what he does now, we asked Schutenko: what would your advice be for himself when he stepped into this role?

‘I think I am one of those driven people, always wanting to achieve more, do more, think more – always jumping in to solve a problem to make it better for my staff or our audience – but I now recognise, looking back, that there is a balance in not trying to fix it all, and too that there are times when just being present is more important,’ he told ArtsHub.

‘I suspect I tried to fix and run too many things too quickly. People need that time for you just to be present in a leadership role.

‘Naturally, for me, I am still working at the pace I did in Melbourne, but in Darwin is a slower-paced city. And in terms of Alice Springs, where two of our six sites are located, things slow down even further and it just seeps into your body – you take that extra half hour. There is something about Alice that does that, and I find that really beautiful,’ he concluded.