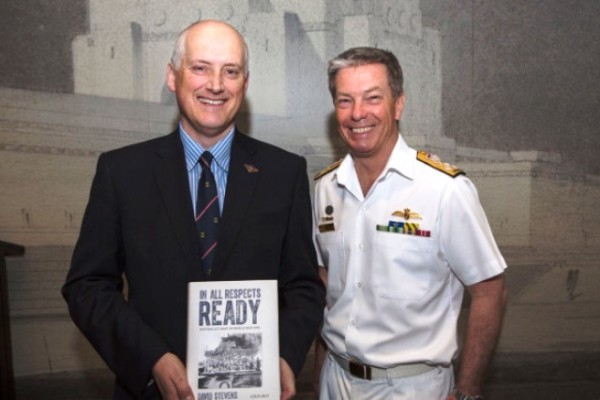 Dr David Stevens with Chief of Navy, VADM Tim Barrett, at the book launch of ‘In All Respects Ready’ in November 2014.

The breadth and outstanding quality of this year’s submissions are a positive reflection of the excellent health of maritime publishing in Australia. We would like to sincerely thank our panel of judges – Peter Ridgway (president of the AAMH), Michael Pearson (emeritus professor of history, University of New South Wales) and Jeffrey Mellefont (Honorary Research Associate of the ANMM and former editor of the museum’s magazine Signals) ­– for willingly undertaking the daunting reading task involved in evaluating our longer than usual ‘short list’!

We are delighted to announce that the winner of the 2015 Frank Broeze Memorial Maritime History Book Prize ($4,000), awarded for a book written in 2013 or 2014 by an Australian author on any aspect of maritime history relating to or affecting Australia, is David Stevens for In All Respects Ready – Australia’s Navy In World War One (Oxford University Press, 2014). This comprehensive and authoritative account details the involvement of the Royal Australian Navy (RAN) in World War I. In 1914, when war broke out, the RAN was less than one year old, but fully trained and ready, and the most professional and effective force Australia had to offer the British Empire. The book traces Australia’s role in the conflict and how the war helped to forge the country’s naval and national identity.

‘As a reader who is not a specialist in RAN history,’ noted one judge, ‘I found David Stevens’ work quite accessible, detailed, thorough and well enough illustrated to add both to my enjoyment and comprehension. At the same time its solid academic foundation was impressive … For a non-expert, its extensive coverage of the many theatres of the war provides insight into the extent of the RAN’s operations as well as the way the war played out in colonial holdings around the world, far from those more familiar theatres of Europe and the Middle East. David Stevens’ previous contributions to naval history are admirable but this one, I think, is his finest work and the most deserving of a wider audience.’

Another judge called it ‘A comprehensive account of RAN operations in WWI that should stand the test of time as a reference … The book helps to rebalance the better known picture of our army’s contribution to WWI [and] provides analysis with which we can compare the state of the RAN at later times’.

The first runner-up was Michael Pembroke for Arthur Phillip – Sailor, Mercenary, Governor, Spy (Hardie Grant, 2014), a biography of the first governor of the colony of New South Wales and the man credited with being the founding father of modern Australia. One judge praised the accessibility and broad appeal of this work, saying ‘The subject matter, if we compare it with those chosen by the other finalists, is the most unexpected and original. Yet while it comes almost out of left-field, after seeing and reading it, I’m left wondering why I haven’t previously seen a popular, accessible work (that I know of) devoted so enlighteningly to this figure of such immense importance to Australia’s history. The narrative is compelling, carefully compiled and convincingly unfolded, in an eminently readable style.’ Another judge called it ‘A lively biography of someone most Australians have heard of but have under-appreciated until now … Phillip’s extraordinary life deserved to be written about’.