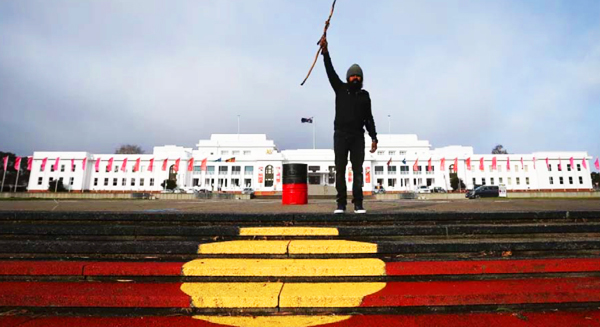 In September 2016, Warren Foster, a Djiringanj man from Wallaga Lake, on the south coast of New South Wales, spoke at a gathering of local historians and writers in Bega.

A dancer, musician, teacher and writer, Foster walked nonchalantly up to the podium, picked up a marker and wrote one word on the whiteboard: “HISTORY.”

Then he added a slash to it: “HIS/STORY.”

By now, the audience was in his hand. He drew a horizontal line, then placed notches at regular intervals until he had a timeline. “This is your history,” he said. “First Cook, then this, then that. We don’t use this!” Another long pause. He drew a large circle and wrote two words inside – “dreaming” and “law”. There was a collective murmur of recognition from the audience.

It became clear to everyone in the room how far removed their understanding of history was from Foster’s. While they thought of history as a succession of happenings, a relentless march forwards from past to present marked with key events or “memories”, Foster had shown them that this was yet another colonial imposition.

Later, answering questions from the floor, Foster reflected with considerable regret that non-Indigenous Australians remained largely ignorant of Indigenous forms of knowledge. “You just don’t know,” he insisted, “you don’t understand how we live.”

He admitted that he still felt like an “outsider” in his own country. Foster had heard many whitefellas speak of acknowledging history and “moving on”, as if the past was a commodity that could be selectively embraced and abandoned at the nation’s convenience. But he was unable to leave history behind him. He lived its consequences every day.

His comments reminded me of a remark by Warlpiri elder Rosie Nappurrula. When the Europeans came to her land in Central Australia, she said, it represented “the end of the Jukurrpa [Dreaming]”. This was not to say that the Dreaming was over, but that she was unable to live in the Dreaming in the same way as before.

As Peggy Rockman Napaljarri and Lee Cataldi explain in their introduction to Warlpiri Dreamings and Histories, an extraordinary collection of 15 stories from Warlpiri elders, the arrival of Europeans meant the “end of the Jukurrpa as a world view, as a single, total explanation for the universe”.

If this is true of blackfella Dreaming, what then of whitefella Dreaming? After nearly 230 years of living with Indigenous Australians, has it not too been altered?

Now that the Indigenous cultures that were thought to be destined for extinction have emerged to demand their rightful place in the Commonwealth, and in light of new historical knowledge, can we continue living in our Dreaming in the same way as before? Still asserting that the country is ours for the taking? Still believing that our civilisation has a right to supersede that of Indigenous Australians? Still claiming that our ways of governing the country are superior and uncontestable?