You are here: Home » Articles filed under: 'News' » Article: 'MA’s Kim McKay stands up for predecessor' 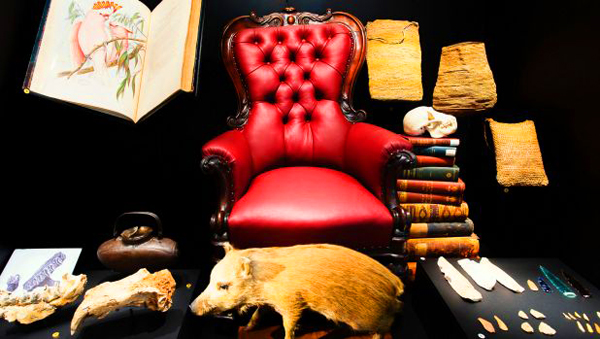 Gerard Krefft’s chair and a stuffed pig similar to his pet that used to trot after him can now be seen at the Australian Museum. Photo: Christopher Pearce.

Gerard Krefft​, an early Darwinist and the controversial leader of the Australian Museum 140 years ago, was so interested in the public’s response to the curiosities in the then newish Long Gallery that he cut peepholes in the glass.

The German artist and self-taught scientist, Krefft wanted to see how the species Homo sapien reacted to displays, including a fetus in a glass jar.

He was perhaps the most colourful and inflammatory of the museum’s directors, and attempts to get rid of him were legendary. They included a parliamentary inquiry following the theft of gold at the museum, implicating Krefft, and several court cases including allegations of drunkenness and refusal to follow orders from trustees who included the then Attorney General, Treasurer and Chief Justice.

Krefft was harder to wrangle than one of the snakes he loved and wrote about in his famous books, Snakes of Australia, and his extensive talents and intellect didn’t include restraint.

Sir Henry Parkes urged him “to keep a cool temper and a respectful bearing even to gentlemen who may be opposed to you”, reports the Australian Dictionary of Biography.

But the collector and natural scientist, who who first came to Australia in search of gold in 1857, refused to defend himself against the allegations, and was finally turfed, chair and all.

The current director Kim McKay said she was proud the museum was finally acknowledging her predecessor, who was the curator of the Australian Museum for 13 years from 1861, as one of Australia’s “most underrated heroes” and for his role in introducing the formal study of science at the museum.

“He is one of those Australians who we have overlooked, and he was incredibly significant,” she said.