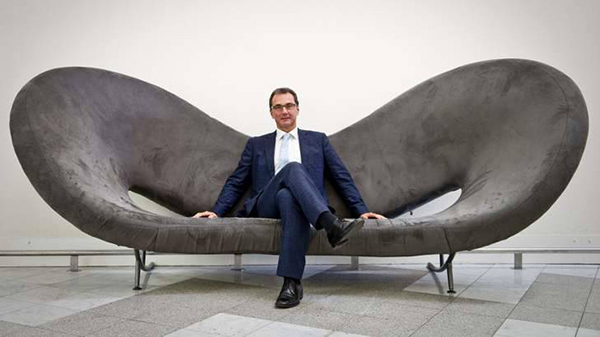 Doctor Mathew Trinca AM – as he becomes in the Australia Day honours – committed a slight indiscretion when he heard of his award.

At the time, the 94-year-old mother of the director of the National Museum of Australia was on her death bed. Her son whispered that he was going to become a Member of the Order of Australia.

“I understood that she wouldn’t be here when I got it,” he said.

Mrs Trinca died on January 15 knowing that her son had been given one of greatest honours Australia confers.

When she was told, she simply said: “Well done, son.”

Dr Trinca was brought up in humble circumstances in Western Australia. His father migrated from Italy as a stone-mason and then worked in Australia cutting wood, searching for gold and eventually having a chicken farm. His wife – Dr Trinca’s mother – was born in Australia of Italian parents.

They had four children, including Dr Trinca’s three sisters. All are graduates – he says they achieved degrees because of the value his parents put on education even though neither parent went beyond primary school.

He ended up with a PhD in Australian history at the University of Sydney. He joined the National Museum as a senior curator in 2003, after working at the Western Australian Museum in Perth. From 2006, he was the Museum’s assistant director, Collections, Content and Exhibitions and then became the director in 2014.

But perhaps just as important as titles and qualifications, was the atmosphere of his childhood. He and his three sisters grew up in a boisterous, talkative family, melding an Italian background with Australian life on the outskirts of a city, not that far from the bush.

His father would talk to friends over red wine and walnuts and the children would be engrossed. The language would switch from Italian to English and back. Conversation was important – and conversation means ideas and argument. It was a world of enthusiasm and good fortune forged from hard work.

He thinks the institution he runs is about telling the different stories which weave together to make up Australian life, from the original Australians through to the British colonisers and then to the more recent immigrants from all over the world – like his own family.

“The Museum is the place where the stories of Australians come alive, where the long human history of this continent intersects with the more recent creation of the modern Australian nation we know today,” he has said.

It’s a long way from his childhood. “I came from a modest, ordinary family in Perth. When I was growing up I never thought that I would end up living in Canberra and being director of the National Museum of Australia,” he said.

Dr Trinca attributes his success to those around him, both in the museum and in his family.

“I’m delighted to have the recognition for my work,” he said.

“But I am struck by how much personal success depends on the work of others.

“I’ve worked with fantastic people. I take it as a real tribute to the National Museum and the other associations I’ve been involved with.”

He also thanks his “great family”.

“My wife and children have been very involved in this work. Without them, I wouldn’t have been able to do anything that I have done,” he said.

Katrina Sedgwick, Director of the Australian Centre of the Moving Image was awarded was awarded the Medal of the Order of Australia (OAM) for service to performing, screen, and visual arts administration.

She has a particular interest in developing multi-platform and hybrid projects, and has an extensive background as a commissioner, creative producer, arts festival director and performer.

She resigned as Head of TV Arts at the ABC in February 2015, then took up the position of Director/CEO of the Australian Centre for the Moving Image in Melbourne.

From 2012 – 14 she was Head of Arts for ABC Television and ABC Arts online (abc.net.au/arts), commissioning a diverse range of projects for prime time television and developing a new strategy for Arts across the ABC – Television, Radio, News and Online. From 2002 – 11 she was the founding Director/CEO of the biennial Adelaide Film Festival, and its Investment Fund, supporting Australian features, documentaries, shorts, cross platform and installation works.

She was Special Events Producer for the 1998 and 2000 Adelaide Festival of Arts, the Artistic Director for Adelaide Fringe 2002 and Come Out ’99, the Australian Festival for Young People. She is on the Creative State Advisory Board, the Monash Culture Media Economy Board and the board of Back to Back Theatre. Katrina was formerly Chair of the South Australian Youth Arts Board (2003 – 2008), and a former board member of Chunky Move, the Australian Children’s Television Foundation and the Art Gallery of South Australia.