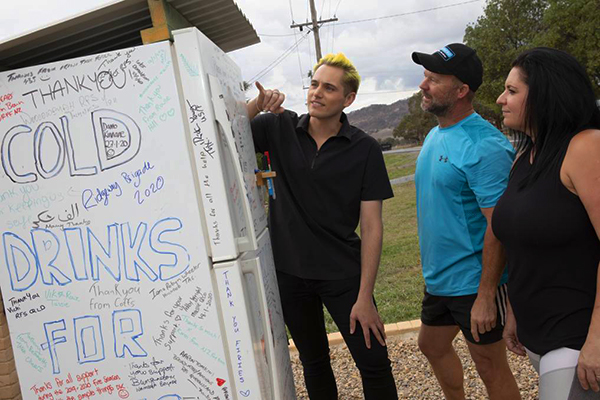 It was the fridge by the roadside that stood as a symbol of community spirit through a harsh, dry summer, harbouring icy poles, drinks and snacks for the firefighters trekking back and forth along the Kings Highway.

Now it is set to make its way to a permanent home at the National Museum of Australia, where it will be displayed as the first in a projected series of acquisitions documenting the impact of the horror fire season.

Claire Hooper said she thought it was “daft” to put a fridge on the side of the road at the front of their house in Bungendore when her husband, Scott Hooper, suggested it in December.

But it quickly gained attention, with the community continually replenishing stocks and countless fire crews stopping on the way to fight fires threatening properties near Braidwood and on the South Coast, adding their names to the fridge in marker.

“I just hope everybody appreciates what it was meant to represent and the amount of people that put time and effort into [it], just stopping by, taking a picture, signing the fridge,” Mrs Hooper said. 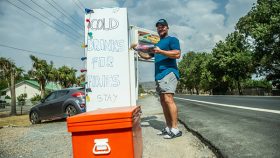 “The New Zealand guys were here – they were here for a seven-day stretch – and they stopped in to say thank you.

After the the fires calmed, the Hooper family offered the fridge to the Bungendore Rural Fire Service brigade. But brigade deputy captain Richard Thorek thought it would be a waste to keep it at the back of a fire shed. So he got in touch with the National Museum. 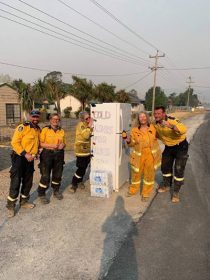 Firies enjoying a cold drink thanks to the fridge set out by the Hooper family of Bungendore in early January. Picture: Carwoola Rural Fire Brigade.

Museum curator Craig Middleton said all the stories associated with the fridge would be collected and even the fridge’s dust preserved, all part of an important exercise in contemporary collecting.

“If we’re not thinking about what’s going on and collecting as much as we can in that sense about these significant moments that we can tell now are significant, then we lose parts of our history, basically,” Mr Middleton said.

The museum’s director, Dr Mathew Trinca, said the fridge typified the kindness and community spirit of Australians facing difficult times and welcomed the fridge’s donation to the national collection.

“It’s incumbent on the museum to both make a material record of these fires but also help people across the country tell their stories of what has transpired and how they were affected,” Dr Trinca said.

The fridge is expected to be brought to the museum in the coming week, with remaining donations, stockpiled in the Hooper’s shed, distributed to the Bungendore Rural Fire Service.