You are here: Home » Articles filed under: 'News' » Article: 'Material girls: some of Tas’s intriguing'

Material girls: some of Tas’s intriguing 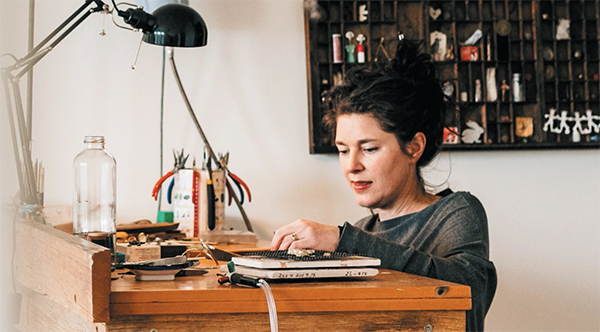 Designer Anita Dineen’s cheese knife is produced by Alessi and has been declared an “Australian classic”. Credit: Adam Gibson.

Anita Dineen works from home on a bench made by her father, a grazier, with timber salvaged from a loading ramp in his sheep yard. From here she crafts exquisite jewellery and homewares, such as her ultra-minimalist Antechinus cheese knife, recently nominated an Australian design classic. While she cherishes the “extraordinary light and changing skies” of her birthplace, her sense of Tasmanian exceptionalism – her Tasmanianism – is, more than anything, a state of mind.

“Being on this little island, there is a remoteness and solitude that’s easy to find,” she says. “I’m happy being on my own. I go into this other-worldly realm, this magical world, where I get my ideas and my inspiration.”

Timber has traditionally been the mainstay of Tasmanian design. The state’s old-growth forests and indigenous timbers such as huon pine, king billy pine, celery top pine, sassafras and myrtle provide both the raw material and the inspiration for artisans and sculptors alike. It’s a measure of the culture’s reverence for wood that the only permanent exhibition at the Launceston-based Design Tasmania, an advocacy body, exhibition space and retail store, is a timber collection: the largest of its kind in the world.

Dineen works mainly in metal, attracted by its combination of delicacy and durability. The 47-year-old’s body of work is a glorious paradox. Her famed cheese knife, produced by Alessi, is a Brancusi-like abstraction so shorn of ornamentation that it is little more than a standing blade, a sculpture that just happens to slice cheese. Her bespoke jewellery is a whole other thing. It’s fanciful and highly embellished and a touch antiquarian.

“If I’m looking to simplify or refine something, I always go to nature.”

“My mum often said, ‘Sometimes I think you were born in the wrong century, darling,’ ” she says, laughing, when we meet at her Launceston home. Dineen melts a stick of sealing wax onto an envelope and applies one of her own custom-made seals embossed with an Owl of Athena: a symbol of knowledge since antiquity. “Whenever I sell a jewellery piece, I wrap it in white paper and seal it with wax,” she says. “If I could send it by carrier pigeon, I probably would.”

Her childhood was spent on a sheep property nestled among the rolling hills of Tasmania’s north, and on leaving school she trained as a wool classer. She maintains a love of natural fabrics and keeps a sentimental sample of high-grade fleece in a glass display case.

The wool industry’s loss is the design world’s gain. And after an almost two-year horror stretch in which she was felled by abdominal pain that turned out, following an initial misdiagnosis, to be a seven-millimetre kidney stone, endured a hysterectomy after the discovery of atypical ovarian cells, immediately developed post-operative deep vein thrombosis and a pulmonary embolism, she is coming up for air. “I’m no longer complaining about going into early menopause,” she says. “I just think I’m really lucky to be alive.”

With her furniture designer husband, Luke, she is renovating a rambling Victorian gem perched above the Tamar River with stirring views towards the mountains. On the dining room table lies one of her playfully poetic bespoke jewellery pieces. It’s an exquisite silver pendant of a whale under sail – like the love child of Leviathan and a Spanish galleon. She turns it to the reverse side to reveal an oarfish, one of the longest marine species, propelled by a wooden paddle. The detailing is very fine – the fish is covered in minute scales and the sails’ billows are accented by tiny perforations.

When the conversation turns to the evolution of her cheese knife, fancy gives way to clear-eyed practicality. Her gift is that she gets both. The prototype was her smaller Glide Gourmet knife, inspired by a winged sycamore seed that fluttered onto her doorstep one day. “If I’m looking to simplify or refine something,” she says, “I always go to nature.” The compulsion to design the propeller-shaped knife was frustration at her old paté knife. “It had such a heavy round handle that it would roll away if dropped on the floor. I thought, ‘There’s got to be a better way.’ ”

She was selling the Glide Gourmet knife, which had won the 2009 Tasmanian Design Award, at a market stall one day when a woman approached to ask for her cheese knife. “I confessed that I didn’t make a cheese knife. But the stranger said, ‘Really you do.’ I insisted that I didn’t. ‘I want to see that cheese knife,’ she said. It was all very peculiar. But I left thinking I’d better make one. And I did. I applied the same principles that I’d applied to the Glide Gourmet knife. I just took away the handle. And I wanted it to look like a mouse simply because that amused me.”

The cheese knife, named Antechinus after a small, mouse-like Tasmanian marsupial, went on to win the inaugural 2014 Vogue Living Alessi Design Award, which entitled her to pitch directly to the company whose products she recalls ogling as a 19-year-old just out of art school, without a spare $300 to splash on one.

Two decades later, she found herself flying at Alessi’s expense to its HQ in Omegna, north-west of Milan. She was put up at a boutique hotel in Verbania, on the shores of Lake Maggiore, and treated like an antipodean princess. “I met Alberto Alessi and his assistant. I brought a bottle of Tassie sparkling wine and a wedge of cheese to demonstrate the knife. The office was chaos – actually, that put me at ease. There were projects everywhere.”

The stainless-steel Antechinus is an integrated blade, heel and handle that stands upright on a cheese board. It’s an ingenious design. But would it pass the parmigiano-reggiano test? Alessi wanted to know. He dispatched one of his engineers to buy a wheel of parmesan and the sharp-nosed knife proved equal to the task, cracking through the hard rind with ease. Pretty soon, Dineen was sitting down talking business.

“In her unconventional pitch to Alberto Alessi in 2014, Dineen thought it was great wine and cheese from Tassie that she was celebrating,” says Ian Wong, senior lecturer in design at Monash University and curator of ICONIC Australian Design, an online exhibition which includes the Antechinus knife among its 100 classic Australian designs.

“In fact, it was her extraordinary talent as a designer-maker. The masterful combination of the inspired narrative of a native Australian mouse foraging among the cheese and the simple, elegant and functional form demonstrates her great talent.”

Dineen takes to heart the dictum: “Have nothing in your house that you do not know to be useful or believe to be beautiful.”

Industrial and domestic design occupy one end of the spectrum of creativity. Contemporary art, which is largely unconstrained by application or function, is at the other. Anita Dineen’s work sits somewhere in between. She is a designer and a maker with an eye for detail who works with an artist’s imaginative freedom.

A colleague refers to Dineen’s jewellery workshop as her “fairy kingdom”. There is certainly an airy quality to her patter, which teeters on the brink of laughter. But she is a self-confessed “control freak” when it comes to her work; little escapes her attention. The quality of Alessi’s kitchenwares that first attracted her was, after all, their “precision”.

Observes Design Tasmania’s Clementine Blackman, granddaughter of artist Charles Blackman: “Anita works like a designer and thinks like an artist. She can pare it back to a single line that takes the form of a steel knife or necklace, but sometimes she’s making a gold and silver bubble-blowing lighthouse crown on your head for a party.”

Her latest piece on the market is a stainless-steel bangle named Topspin. Here the abstraction of her tableware finds expression in her jewellery. The design evolved from a trophy commissioned by Tennis Tasmania, and it began to take shape when Dineen took a female tennis player through a virtual reality session.

“I had her do a forehand swing, a very graceful elegant motion, with a virtual reality headset, a 3D drawing program and printer,” she explains. 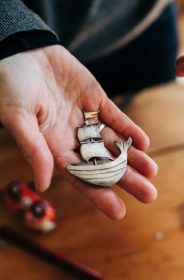 The result, much like the Antechinus knife, is a sinuous movement forged into metallic form. But the bangle is more dynamic than the knife – bolder. One loop is worn away from the body, like an arabesque. Dineen had concerns that it might drag or catch, like a hook, so she wore it for a day and both she and the bangle came through unscathed: it didn’t catch on the shawls of strangers or put out an eye. “You can also wear it as a pendant,” she says, placing the sprung coils around her neck. “It can be worn that way, and that way, and that way.”

As she manipulates the coiled object into one position after another, she talks about the joy of its pliancy. It’s clear her creativity – she calls it an “inherent drive” – is partly a faculty for problem-solving, especially when it comes to ungainly knives that roll away when dropped on the floor, and partly a pursuit of pleasure. She is addicted to the process of making by hand. And when the products of her artisanship are made, and can be held, used and played with, she oftentimes has trouble letting go of them.

Dineen takes to heart the dictum of English designer William Morris: “Have nothing in your house that you do not know to be useful or believe to be beautiful.” It wasn’t always so.

“When I was young I made the mistake of keeping special things for special occasions, but I lost most of them in a warehouse fire,” she recalls. “The warehouse was called TLC, of all things. There was an electrical fault and the whole thing burnt down. I was devastated. My response was to go travelling and collect more lovely things. They became part of my everyday life, and I never forgot the lesson. Good things are to be used, and good people to be loved.”