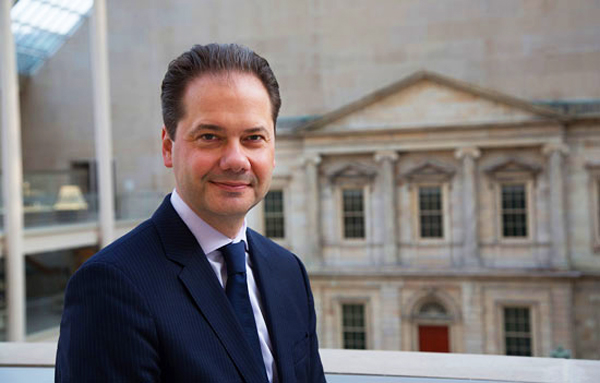 Smart is the adjective that always crops up when people describe Max Hollein, the Metropolitan Museum’s new director. Yesterday, he made one of his first smart moves by issuing a detailed letter to Met members, appending an email address through which they can share “any thoughts about the museum.”

To convey some idea of who Max is and what he plans to do, here are extensive excerpts from his members’ missive (emphases added; my commentary in brackets):

I write to introduce myself and hope that we will meet in the coming months at one of our openings, educational events, gatherings, or simply in the galleries [distinguishing himself, out of the starting gate, from his relatively aloof two predecessors]. Having just begun my tenure as Director of the Metropolitan Museum of Art last week, a very important first step for me is to connect with you and reach out to the entire membership of the Museum [privileging them with high priority].

I want to share a few reflections on the importance of museums today and the opportunities we face, to thank you for your support of The Met, and to invite you to share your views and feedback with me.

First, some background about me: Although I was born and raised in Vienna, Austria, this is a return to New York for me and my wife, Nina. In the 1990s, I worked for over five years at the Guggenheim Museum during a very exciting and ambitious period for that museum [under the controversial directorship of Tom Krens]. We then moved to Frankfurt, Germany where I began my career as a museum director [the Schirn Kunsthalle since 2001; the Städel Museum and the Sculpture Collection of the Liebieghaus since 2006].

After 12 years, during which our family grew to five with our three children, we moved to San Francisco in 2016 where I led the Fine Arts Museums of San Francisco. When I was contacted by the Museum’s search committee for the Director role and began conversations with the trustees and Dan Weiss, Met President and CEO, I knew immediately this would be a once-in-a-lifetime opportunity [prompting him to leave the revolving-door directorship of FAMSF after only two years].

Since my appointment in the spring, I have had the pleasure of spending a bit of time at the Museum. I’ve had meetings with a handful of staff, attended a few Board meetings, and enjoyed some informal gatherings with trustees and staff. [I assume meetings with staff have ramped up considerably since his arrival.] At every turn, I am struck by the dedication to our Museum’s mission that is evident in every person I meet. This devotion is inspiring and manifests itself in a variety of ways—through genuine excitement, unparalleled expertise, length of tenure [actually, that’s been sadly compromised, as I explain below], palpable commitment to our work, and extraordinary generosity of time and resources.…

Museums remain a unique place to experience the artistic achievements of humankind, but now we have many other ways to disseminate cultural education and knowledge, along with an obligation to do so way beyond the physical perimeters of the building [cue the “Digitorial”]. Even more important, there is certainly not just one narrative about the cultures of the world, but rather multiple interconnected, entangled histories that need to be told.

Celebrating artistic excellence and cultural achievement, and fostering its understanding, entails that we provide a diversity of perspectives [today’s buzzwords] and viewpoints. Expanding the complex readability of our objects necessitates focusing on their artistic brilliance and art-historical relevance, as well as on their embedded role and their often-charged origins in a complex social, political, and historical framework….

I’ll be spending these first few months working with as many people as possible in an effort to get to know the Museum as well as I can, and starting to work on a range of projects.

What might that “range of projects” be? In an interview with Dodie Kazanjian of Vogue, published online yesterday, he stated that “modern and contemporary will be part of the equation in the entire museum in multiple ways. What the Met can do is bring it together with older art in a much broader, more complex, sometimes more surprising dialogue [emphasis added].”

I assume that eclectic approach is intended to supplement, not supplant, the traditional arrangement of permanent-collection galleries according to time and place. Matings of strange bedfellows, such as Max seems to envision, already happen at the Met Breuer. But until we get a fuller understanding of Hollein’s line, I’m feeling just a little apprehensive about where he’s going with this.

In this context, it’s time to re-up my blog post from my far-ranging conversation with Hollein when he visited New York two years ago, during which he discussed his digital initiatives at the Städel Museum (one of the three Frankfurt museums that he then directed simultaneously).

Hollein also let slip to Kazanjian a hint that the Met might not renew its eight-year lease of the Whitney’s Breuer building: “The Breuer is a temporary solution. A great space, but I don’t want to officially comment on this.” Had I been in Dodie’s chair, I would have interpreted this as an explicit instruction not to publish the Breuer remark, but she (deliberately?) didn’t get it.

When I recently interviewed Ian Wardropper, the Frick Collection’s director, he shared his impression of Max. Wardropper had applied for the Met directorship last time around, but is now happily ensconced on E. 70th Street and says he’s “much better off” for having lost to Tom Campbell.