You are here: Home » Articles filed under: 'News' » Article: 'Medici at the Met: Portraits & Politics'

Medici at the Met: Portraits & Politics

July 15th, 2021 | Browse other: News. | Tagged with: Meddling With Medici at the Met: Provocations & Proclamations, The Medici: Portraits and Politics | 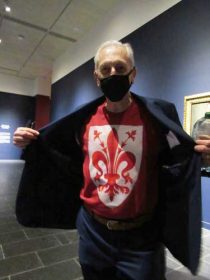 Keith Christiansen, showing off t-shirt with the Florentine lily Photo by Lee Rosenbaum.

The Medici: Portraits and Politics, at the Metropolitan Museum to Oct. 11, is a curatorial tour de force that only a veteran scholar with the deep knowledge and extensive contacts of Keith Christiansen could pull off. With his retirement today today after 43 years at the Met, this show is his swansong at the museum, where he is Chairman of European paintings. (His successor in that role has yet to be named.)

With nothing to lose, he went rogue at last week’s press preview:

The “Medici” of the title refers primarily to one member of that illustrious family of merchants, bankers, rulers and art patrons—Cosimo I, who appears in the Met’s show in the in what this painting’s label calls, “unquestionably one of the most provocative portraits of the Renaissance”:

In case that painting isn’t titillating enough, Christiansen and co-curator Carlo Falciani, professor of art history at the Accademia di Belle Arti, Florence, have served up a Bronzino beefcake buffet: 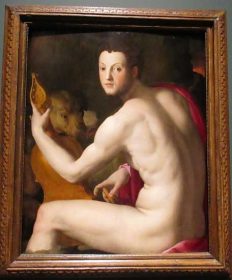 According to the label, the “disconcerting nudity” of “the celebrated naval commander Andrea Doria” (on the right) “alludes to the virility and sexual power that were linked to public concepts and heroism and may also carry a homoerotic subtext.” He is holding a trident, which (as the Met’s label states) “is a later substitution for what was originally an oar and is “the attribute of the sea god Neptune.” 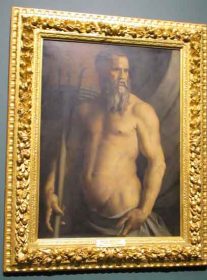 Here’s Cosimo I depicted by the same artist, but in a more sedate pose (at the age of 40), holding a letter pertaining to government affairs (as the label states): 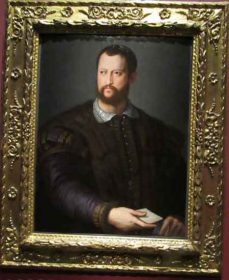 In a future post, I’ll offer more serious (less salacious) commentary on this show and its peculiar resonance with another Met portraits show drawing crowds. For now, though, let’s bid a fond farewell to Keith on his last official day at the Met, via one more star turn in a CultureGrrl Video (with a brief lead-in from director Max Hollein):