Objects more than 1000 years old will be among the prized collection of medieval artefacts to be held exclusively at the Queensland Museum. 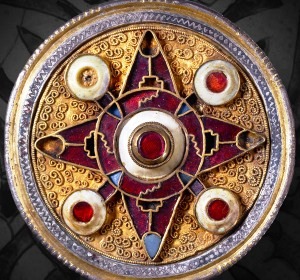 Gilt brooch to feature in the Medieval Power exhibition to be held at the Queensland Museum from 11 December 2015. Photo: British Museum.

Medieval Power: Symbols and Splendour will come to Brisbane from the British Museum in December, the first city in the world to host it.

Queensland Museum CEO Suzanne Miller said the exhibition would span the years AD 400 to 1500, would feature knights’ helmets, swords and other tools of war, as well as religious relics such as stained glass and papal rings among its 250 items.

“These artefacts tell the stories of a vibrant and fascinating period of history when many of the countries and cultures of modern Europe were formed,” Professor Miller said.

“Exhibition visitors can experience all aspects of this period, from the splendour of the Royal Court through to everyday life – it will truly open a window to the Middle Ages.”

Premier Annastacia Palaszczuk said the Brisbane premiere would be the first time some of the objects in the collection had been displayed.

“The exhibition is a rare opportunity to see original artefacts and revisit a time of pageantry, banquets, jousting and knights from an age that is still enormously popular today,” she said.