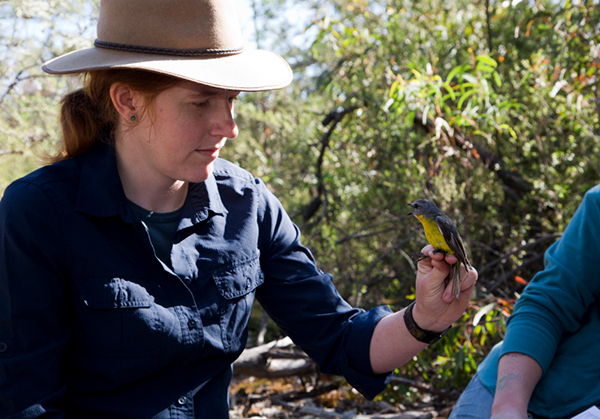 If you’ve ever wondered which bird (or other animal) is making that sound in your backyard, Dr Rowe probably knows the answer. In partnership with Museums Victoria, the biodiversity research scientist gives us a glimpse into her varied day-to-day work.

Doctor Karen Rowe might study animals every day, but her sense of wonder remains constant. As an American expat, she’s fascinated by Australian fauna – especially the threatened bird species she studies as a biodiversity research scientist for Museums Victoria.

“I’m still excited just to see a kangaroo hopping away or a rainbow lorikeet squawking overhead,” she says.

Dr Rowe initially studied ornithology – then ecology, evolution, conservation, and molecular genetics as a PhD student at the University of Illinois at Urbana-Champaign, before doing her post-doctorate at the Museum of Vertebrate Zoology at the University of California, Berkeley. She joined Museums Victoria in 2011, where she’s now the Hugh Williamson Research Fellow.

Using programmable audio recorders to identify specific species of endangered birds, Dr Rowe and her fellow researchers can track them across various landscapes for conversation purposes. (She also tracks mammals such as broad-toothed rats, whose populations have been affected by climate change.)

Dr Rowe just finished a four-year project called Communities Listening for Nature, in which community groups developed acoustic monitoring projects to track birds in their areas. She unpacks the daily highlights of her job for us below.

How would you explain your job to a non-museum person?

I use museum collections and natural-history knowledge to test questions about how animals interact with each other, their surroundings and us. Many of these questions relate to how historical and modern activities impact where animals once were, where they are now and whether they are likely to persist into the future.

What is the strangest thing your job entails?

Since I started working with audio recordings, I’m asked about strange sounds people hear. Night-time sounds are particularly perplexing, as they’re often unfamiliar. Tawny frogmouths make a low-frequency pulsing that sounds more human-made than natural. And if you’re out in the bush at night, a brush-tailed possum or a fox can sound particularly unsettling!

When someone wants to know a sound but can’t make a recording, it’s fascinating to see how people describe nature sounds. “A creaky door”, “shaking a box of matches” and “R2-D2” are just a few I’ve heard before. (In case you’re wondering, those are a gang-gang cockatoo, a willie wagtail and black-faced cuckoo-shrike respectively).

What’s the most rewarding thing about your job?

Every day is different. One day I could be out in the field looking for owls, the next meeting with community members to learn about their local wildlife, writing code to make a figure for a scientific paper, giving a talk to university students about wildlife monitoring, or taking a workshop in sound analysis.

What’s the most memorable situation you’ve encountered in your work?

My experience with parrots up to then was behind a mesh screen at a zoo. What an extraordinary way to end a day, experiencing unscripted nature – something that still thrills me today.

Explore the ambitious Communities Listening for Nature project and listen to audio samples from the project, among other highlights from Melbourne Museum at Home.