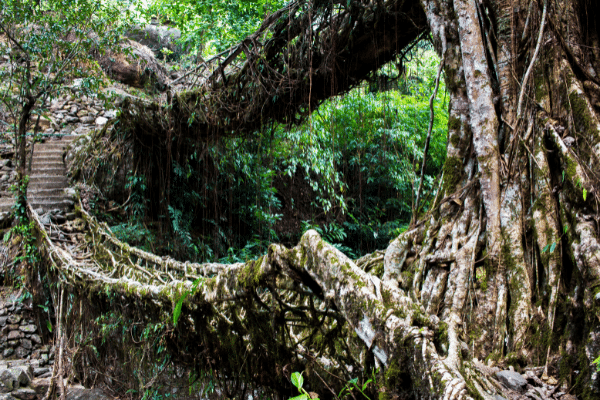 Locally known as “Jingkieng Jri”, there are around 100 known living root bridges found in 72 villages in the East Khasi Hills district and West Jaintia Hills district of the mountainous state.

Meghalaya’s Forest and Environment Minister James K. Sangma in a series of tweets said: “I am thrilled to announce that our ‘Jingkieng Jri : Living Root Bridge Cultural Landscapes of Meghalaya has been included in the UNESCO World Heritage Site tentative list.

“The living root bridges not only stand out for their exemplary human-environment symbiotic relationship but also focus on their pioneering use for connectivity and resilience, and the need to adopt sustainable measures to balance economy and ecology. I would like to congratulate members of different communities, stakeholders, and all those who are involved in working towards protecting these intricate bio-engineered bridges,” James K. Sangma said.

A living root bridge is like a suspension bridge formed by guiding the flexible roots of the rubber fig tree across a river or a rivulet and allowing the roots of big trees to grow and strengthen over a period of many years.

Most of these root bridges are made by stretching roots of a single tree, planted on one side of a stream or river. It takes about 15 to 20 years to build such a bridge and it has a lifespan of several centuries.

Some of these bridges are claimed to be over 200 years old, outliving the bridges made through modern technology.

The Living Root Bridges, which range in span from 15 feet to 250 feet, can survive storms and flash floods and demonstrate a sacred relationship between humans and nature.

These root bridges span across rivers connecting one village to another. Environmentalists said that the Living Root Bridges showcased the indispensable human value of living with sensitivity, protection and respect for all life.There are no credible records to suggest when the indigenous tribals developed this living architecture.