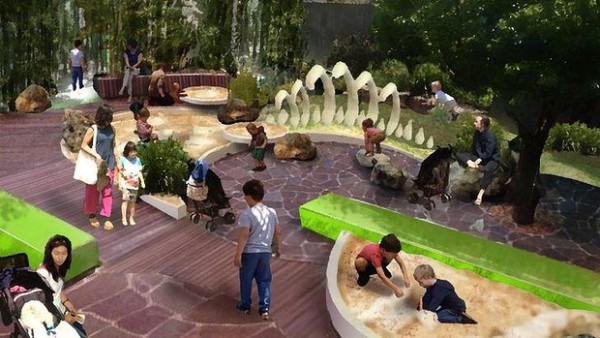 This partnership represents the single largest gift from an individual in Museum Victoria’s history.

The partnership was launched at Melbourne Museum today (Monday 3 August) by the Minister for Creative Industries Martin Foley, MP.

The Gallery, when the redevelopment is completed in December next year, will be named The Pauline Gandel Children’s Gallery in recognition of Mrs Gandel.

Museum Victoria CEO Dr Patrick Greene said it was important to acknowledge the contribution of the Gandels to the people of Victoria.“

Together with Victorian Government funding this partnership with Gandel Philanthropy enables us to develop a world-first exhibition gallery dedicated to fostering learning and creativity in children from birth to 5 years old,’’ Dr Greene said.

“Museum Victoria has consulted widely with early childhood educators and specialists, playground designers and health professionals to create a unique and innovative space that will focus on play-based learning.’’

The redeveloped Gallery will feature a Dinosaur Dig to ‘excavate’ fossils, a Discovery Garden, museum objects and an immersive Camouflage Disco where children can turn into spotty and stripey zoological specimens.

Dr Greene said the opening of The Pauline Gandel Children’s Gallery in December 2016 was timely.

“This coincides with the 100 year anniversary of the first Children’s Gallery opening its doors at what was then the National Museum of Victoria,’’ Dr Greene said.

“Museum Victoria has had a successful and established tradition of providing access to young visitors for a century and we are excited about the experiences we are developing for the spaces in the new Gallery.’’

Pauline Gandel said she hoped visitors and their children would embrace the new gallery.

“Children are our future. The rich and varied experiences that they will encounter in the new Children’s Gallery will no doubt help them grow and develop  into inquisitive, informed and creative people,’’ she said.

“I am very pleased to know that they will be exposed to a unique world of play and fun in a way that will help them learn, and hopefully say to their parents ‘I want to come to the children’s gallery again.’’’