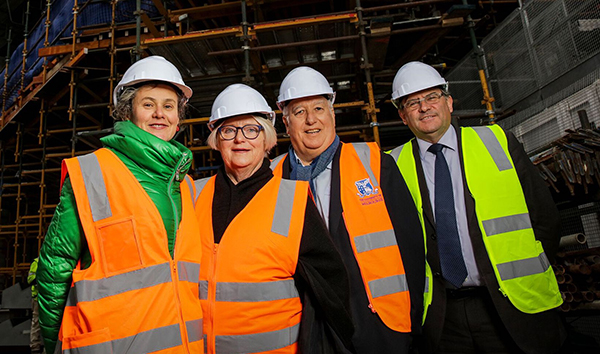 Victoria will be home to a new gallery to inspire young adults in STEAM (Science, Technology, Engineering, Arts and Mathematics) through the generosity and leadership of a $4 million gift from philanthropists Peter and Ruth McMullin.

In announcing their gift during National Science Week, Peter and Ruth McMullin said Science Gallery Melbourne is a vital and important new addition for young people.

“We’ve experienced Science Gallery in its original home in Dublin as well as the pop-up programs in Melbourne and have witnessed young people’s minds being opened to new possibilities. By placing young people at the centre of programs the gallery genuinely reflects their voices and concerns,” the McMullins said.

“The Gallery provides experiences that are transformative at a crucial time in a young person’s life. We believe Science Gallery will have a lasting impact on the future and consider this gift an investment in Australia’s next generation of scientific and creative trailblazers.”

The Science Gallery Melbourne gift is the second major donation to the University of Melbourne from the McMullins, who in 2017 supported the establishment of the Peter McMullin Centre on Statelessness.

Embedded within the Law School, the Centre plays a critical role in worldwide efforts to eliminate statelessness and to protect the rights of stateless people.

Acknowledging the significant gift, Vice-Chancellor Professor Duncan Maskell said: “Peter and Ruth’s extraordinary generosity to the University of Melbourne demonstrates exceptional vision and leadership to inspire tomorrow’s students. They share our passion to stimulate bright minds and I am delighted that they will help bring Science Gallery Melbourne to life and create a wonderful legacy for the nation.”

The $4 million gift is offered under the expectation that Science Gallery Melbourne leverage the gift to match those funds through other donations.

In thanking Peter and Ruth McMullin for their gift, Director Science Gallery Melbourne Rose Hiscock said: “Peter and Ruth are passionate contributors to Australia’s cultural sector. They are generous in their philanthropy and their engagement. Through this gift, Science Gallery will impact the lives of young adults and we hope it inspires other partners to donate.”

Peter and Ruth McMullin have maintained a strong commitment to young people through their civic and professional roles.

Peter McMullin graduated from the University of Melbourne’s Law School in 1975 and has enjoyed a successful career as a lawyer, businessmen and civic leader.  He served as Deputy President of the Museums Board of Victoria, Chair of the Melbourne Comedy Festival and on several prominent arts Boards including the National Portrait Gallery of Australia and Geelong Art Gallery.  He was a Founding Director of the Small Change Foundation which has developed into the leading Foundation for Young Australians.

Ruth McMullin has served on the Board of the much-loved children’s theatre company, Arena Theatre and has extensive experience working with young people and families in the areas of child protection, mental health and education.

Science Gallery Melbourne will be a living laboratory for exhibitions and ideas. Part experiment, part exhibition, the Gallery’s programs will connect, engage and showcase the work of artists, scientists, researchers, industry and a global network of collaborators.

The gallery will include over 3500 sqm of cutting-edge, immersive exhibition and learning spaces. Designed by William Smart at Smart Design Studios, the gallery will delivermodular exhibition spaces, theatres, workshop and social spaces. It will be accompanied by an immersive digital experience that allows interaction and connectivity for young people.

Science Gallery is a powerful addition towards building Australia’s engagement and literacy in STEAM.