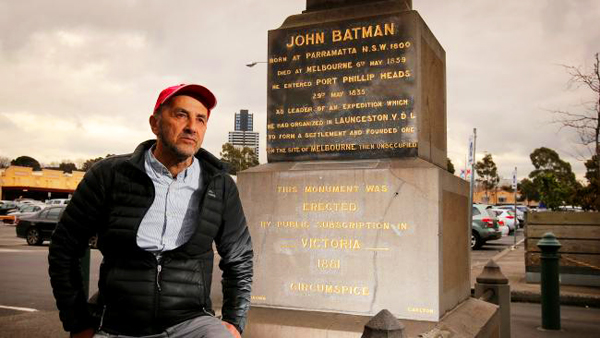 Historian Meyer Eidelson next to a John Batman monument with its original 1881 inscription. Picture: Stuart McEvoy.

Changing the way we record history can be a tricky business: the inscription and subsequent revis­ions on Melbourne’s John ­Batman monument are a case in point.

The towering 1881 bluestone monument, which sits on the corner of the Queen Victoria Market site where the controversial pioneer and city’s “founding father” was originally buried, referred to the land now known as Melbourne as being “unoccupied” when he arrived.

In 1992, the monument quietly received a corrective plaque, which has since been subject to modification.

“When the monument was erected in 1881, the colony considered that the Aboriginal people did not occupy land,” the small bronze 1992 plaque reads.

“It is now clear that prior to the colonisation of Victoria, the land was ­inhabited and used by Aboriginal people.”

However, in 2000, the City of Melbourne’s Aboriginal consul­tative group requested a revised plaque, saying the wording of the original plaque was “too weak”. 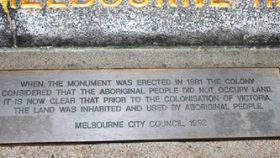 In 1992 a corrective plaque installed on the monument.

In 2004, a new plaque was ­installed, which reads: “The City of Melbourne acknowledges that the historical events and perceptions referred to by this memorial are inaccurate. An apology is made to indigenous people and to the traditio­nal owners of this land for the wrong beliefs of the past and the personal upset caused.” Historian Meyer Eidelson, who has led walking tours through Melbourne’s CBD for 25 years, remembers both plaques being ­attached to the monument.

Though he says it was right for the council to ensure the city reflected­ its history accurately, he has noted that some view the plaque as a “fairly token” gesture.

“Whenever I tour there, some people have found it highly amusing, because there is this huge statue, and tacked on it this six-inch thing saying, ‘By the way, there was a mistake, it wasn’t really empty’,” he said. 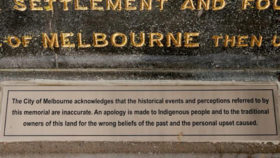 In late 2004 a revised plaque installed to replace the 1992 version. In 2000, the City of Melbourne’s Aboriginal Consultative Group requested the revised corrective plaque be added as it believed the wording of the 1992 plaque was too weak. John So was Lord Mayor (2001-2008) when the current wording was decided upon and installed.

“It sort of gave the appearance of, well, that makes it OK then. It’s so obviously tacked on as an afterthought to be politically correct.”

Mr Eidelson believes the monument shouldn’t be taken down, but says the council could consider commissioning altern­ative public art to better mark the significance of the site, which also includes the city’s first cemetery, containing the remains of many settlers and indigenous people.

“The statue is important,” he said. “We know it’s incorrect (but) it tells the story of the British government­ dispossession, and people can look and see the colonial­ mentality. If you take it away, you take that story away.”

Historian Peter Read, whose academic research into indigenous history earned him an Australia Day honour, said the Batman revisions reflected how complex it was to change attitudes to history.

“It looks like it’s easy to just put up a plaque in bronze and say ‘this is true history’ but it’s almost impossible­ to get everyone to agree unless you state the simplest of facts,” he said.

“These things are complex — there is no reason to think we can’t change anything, but adding one plaque won’t end the problem.”