Professor Graham Durant AM is the Director of Questacon, Australia’s National Science and Technology Centre.  He is an experienced museum and science centre leader with a distinguished academic background.  Originally trained as a geologist at the University of Wales, Graham spent 25 years at the University of Glasgow in a post at the University’s Hunterian Museum and Art Gallery where he had responsibility for geology collections management, exhibitions, lecturing and research.  He progressively became more interested in science communication and his lecturing focus moved from marine science and petrology to science communication.  He was awarded a personal professorship in science interpretation and communication in 2001.

On secondment from the University, Graham played a major role in the establishment of the Glasgow Science Centre which opened in 2001, initially serving as a member of the team that secured the funding and then acting as Director of Science, Exhibits and Programs until the time of opening. Graham served as a member of the Scottish Science Advisory Committee advising the Scottish Executive on science education and science and society matters as well as working on behalf of the UK Particle Physics and Astronomy Research Council and the Wellcome Trust.   He joined Questacon as Director in 2003.  ( www.questacon.edu.au )

In addition to his role as Director of Questacon, Graham is a Visiting Fellow at the Centre for the Public Awareness of Science at the Australian National University and has been appointed to several boards including the Board of Directors of the US-based Association of Science and Technology Centres (ASTC), the Asia Pacific Network of Science Centres (ASPAC) and the Australian Science Festival (ASF).   Graham represents Questacon on the Council for Australasian Museum Directors and the Coordinating Committee for Innovation.  He served as the Chairman of the Education Advisory Group for the Australia-New Zealand Square Kilometre Array Project.

Graham is a member of the Australian Government’s Senior Executive Service and as Director of Questacon, he is a Divisional Head in the Australian Government Department of Industry and Science.  He is currently leading the Inspiring Australia initiative to develop a national science communication strategy for Australia and this responsibility includes the Prime Minister’s Prizes for Science, National Science Week and a competitive grants round for science awareness initiatives.

Graham has a demonstrable commitment to informal learning in science over many years and has presented a significant number of lectures, talks and science shows. He is frequently invited to speak at national and international science centre sector conferences.  He was one of the lead authors for the Toronto and Cape Town Declarations issued at the 5th and 6th Science Centres World Congresses in 2008 and 2011.  He is one of the principal advocates for the global cooperative work of the science centre sector examining ways that science educational activities can contribute to the fostering of understanding across geographical, economic, religious and political boundaries.

Graham was awarded an AM in the 2012 Queen’s Birthday Honours list. 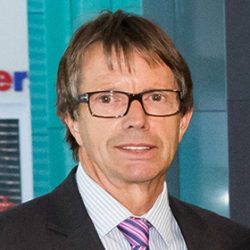