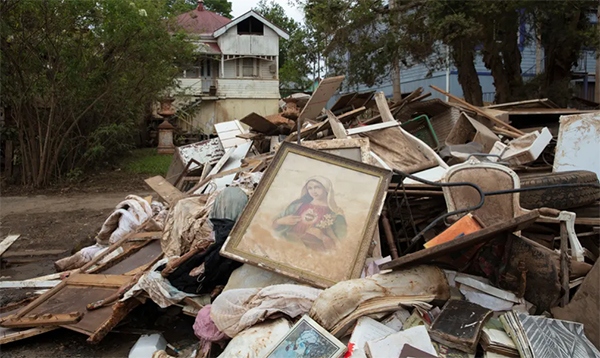 Historians are concerned about what the loss of family memories and cultural heritage will mean for the region.

Two weeks after catastrophic flooding devastated Lismore, hundreds of photographs and postcards line the floor of Simon Robinson’s destroyed home on Union Street in the town’s south. They are the only personal possessions he has left.

Many of them are stuck in pairs, soaked together by the flood waters and mud they were submerged in for days. The 64-year-old antiques dealer is patiently waiting for them to dry, so he can attempt to brush off the remaining dirt and salvage what he can. 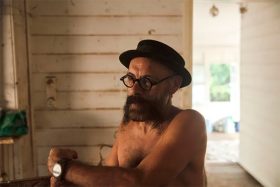 Simon Robinson has lost precious personal items such as photos of his late father as well as some $500,000 of antiques from his shop. Photograph: Brendan Beirne/The Guardian.

Having shunned computers and scanning digital backups, the roughly 40 family pictures and scores of postcards from disjointed collections are some of Robinson’s few remaining keepsakes.

Now, in the aftermath of the floods in the New South Wales norther rivers region, Robinson is using a smartphone for the first time, after his previous phone was ruined when he dropped it in water trying to break through a fibro gable above his living room.

Initially, Robinson considered himself lucky when, after believing he was destined to drown as waters rose beyond his ceiling, he was rescued almost 18 hours later from the roof of his late 19th century house.

However, a fortnight on, he is dealing with a new loss. As he sifts through the remains of his life, it is not the roughly $500,000 of antiques lost from his home and his shop in Lismore that are of most concern.

It’s the realisation he now has no photographs of his late father. “I had the album of Dad’s 21st birthday in there, and I haven’t even seen that wash up, it’s just gone,” Robinson said.

Robinson has been collecting antiques for 50 years. The floods ruined historic photos, books and newspaper clippings of noteworthy events from as far back as the 1910s, as well as architectural, military and art pieces of global significance. 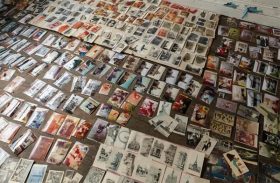 Among his collection was a rare album of photos taken shortly after Sir Charles Kingsford Smith crashed one of his planes near Old Bonalbo – a small town about 70km west of Lismore – in 1930. Few photos of the event are known to exist, and Robinson said his album was washed away in the floods.

“The Lismore-related things, I had always planned to donate them to the local museum. There were also hats and parasols from the Victorian era, it’s stuff you can’t replace,” he said.

Robinson, like thousands of other residents of Lismore and the northern rivers, is only now comprehending the enormity of the flood’s long-term damage on the region’s history.

The loss to the area’s art and cultural assets has also been profound. The Lismore regional gallery has reportedly suffered “sickening” damage, according to its director, Ashleigh Ralph. The NSW government quickly organised a convoy of freezer trucks – essential to stop mould forming – to move damaged pieces to Brisbane to attempt a mass salvage operation.

But not all collections were able to access this assistance.

Mountains of books have formed outside Lismore library, destined to be incorporated into the year’s worth of landfill created by the floods.

Millions of dollars of collectibles owned by local antique stores have also been thrown into garbage piles as owners assess the damage.

However, archivists and historians are now asking flood-affected residents and business owners to reconsider what they believe is unsalvageable to “prevent communities losing their heritage and their cultural identity”.

Jennifer Gall, a curator from the National Film and Sound Archive of Australia, grew up in Lismore, and is concerned at what the loss of historical artefacts and family memories will mean for the region. 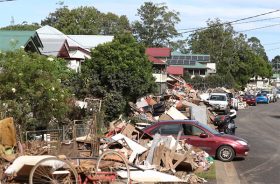 Scenes of damage caused by the flooding in South Lismore. Photograph: Jason O’Brien/AAP.

“It’s a well-documented fact that in the initial cleanout, people throw out everything without sorting – the enormity of the damage is too momentous to cope with. Then people wake up in a month’s time and realise that they threw out their entire family history, or their valuable historic shop stock and regret this,” Gall said.

“This loss of identity and personal treasures is doubly devastating after losing a house and other important possessions.”

Gall is urging flood-affected residents and businesses to consult professional advice about how to salvage flood-damaged items. This includes freezing individual items in bags as soon as possible to prevent moulding.

“Please pause and think before you throw out photos, films, documents, wedding dresses, musical instruments and so on,” she said.

She is also concerned about the loss of town records.

“These are the memory of working class people, who have lived as farmers, and there are huge Indigenous collections too. These are the records of the common person.

“Most of us are not mentioned in history books, but our lives make up the fabric of society. When these records are damaged, we’re in danger of being left with just published books about those with money and education.” 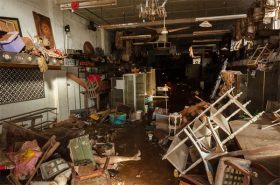 One of the most significant repositories of this local history is the Lismore museum. Robert Smith, the president of the Richmond River Historical Society that runs the museum, said a plan to store its holdings on the top level of the building had largely spared the collection from damage.

However, cabinets containing original maps and plans for Lismore, and several boxes of archival film that were in the process of being digitised were water damaged.

Smith said he was thankful that these items were also collected by the government-organised freezer trucks and was hopeful they could be salvaged.

However, Smith, who is also a professor at the local Southern Cross University and a longtime researcher on the culture and history of the north coast of NSW, acknowledges just how important the loss of individual and family possessions will be for the region.

“Possessions are so much more than an object, they hold stories that someone in the family is yet to hear, that they maybe weren’t yet ready to hear. Those stories help one make sense of one’s place in their family and in this region,” Smith said.

Back at Robinson’s store in Lismore, he thinks he will be able to salvage some plaster religious statues. However, looking around the floors of his house and surveying the damaged photographs, he is overwhelmed.

“It’s hard to think straight at the moment,” Robinson said.