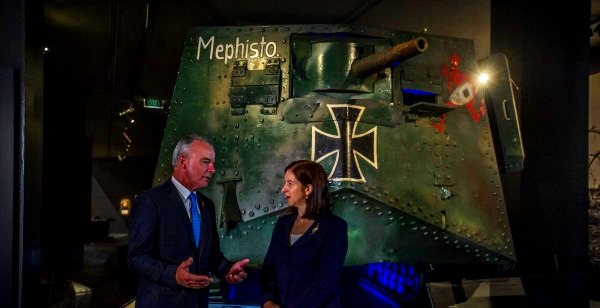 For Australian troops in World War I, the state of the art German tanks were something to be feared.

The Mephisto, one of the German tanks, was captured by Australian troops in 1918 after it got  stuck in a hole, and was brought back to Australia at the end of the war.

It is now the last remaining tank of its kind in the world.

Of Germany’s A7V Sturmpanzerwagen, only 20 were ever built for war, and the Mephisto was one of them.

The tanks were cramped, hot, and noisy, making it an unpleasant experience for the crews on board, which could be up to 26 men at a time.

For many German tank crews, painting decorations on their tank was a form of both enjoyment and a way of making their tank distinguishable from others in the fleet.

One such painting can be found on the upper front panel of the Mephisto. The painting depicts Mephistopheles – the red, smiling Faustian demon.

Canberrans will now have the opportunity to delve into the history of Mephisto with the prized tank going on display at the Australian War Memorial.

The tank will be on display for 18 months as part of a collaboration with the Queensland Museum.

It is the first time Mephisto has been displayed outside of Queensland.

The tank will be take pride of place in Anzac Hall, where visitors can view it and learn more about its history through the use of touch screens and information pillars around the exhibit.

Australian War Memorial director Brendan Nelson said bringing the tank to Canberra would allow more Australians to learn about tank warfare in World War I and the engineering side of German tanks.