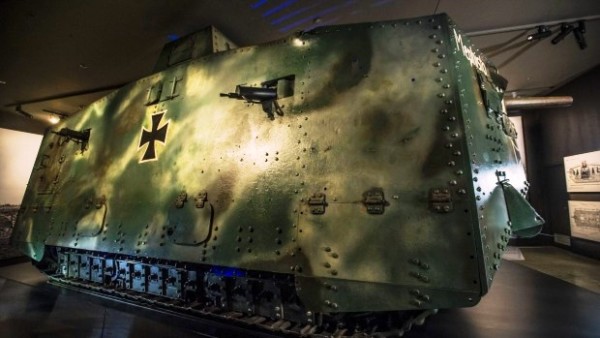 Mephisto is on loan to the Australian War Memorial in Canberra. Photo: Karleen Minney.

The final days of a near-century-old World War I German tank could be partially relived through advanced 3D technology, thanks to research conducted by a Queensland scientist.

German tank Mephisto, which fought its first battle nearly 98 years ago, has been on loan to the Australian War Memorial in Canberra from the Queensland Museum since last year, where it will remain until mid-2017.

It was the last surviving original German A7V tank and was captured by Australian troops in 1918, when it was found abandoned at Monument Wood, near Villers-Bretonneux in France.

Mephisto was brought back to Queensland as a war trophy and had been on display at the Queensland Museum for about 70 years.

Griffith University PhD candidate Chris Little said Mephisto was more than just a tank – it had become a part of Australian folklore.

“War trophy or not, there are so many people who have had a personal connection or relationship with this tank,” he said.