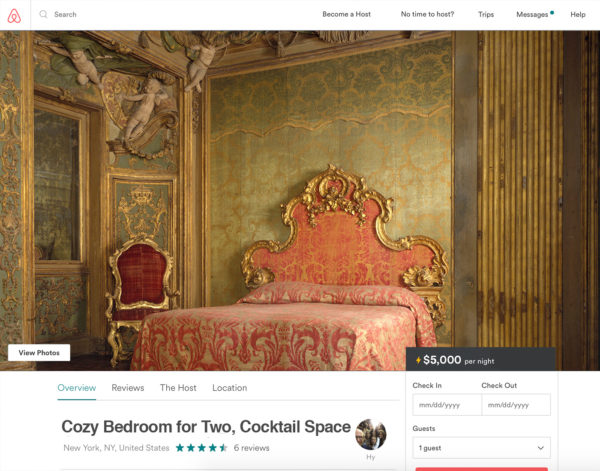 The new initiative, dubbed “The Metbnb,” will allow visitors to spend the night in the museum’s historic rooms for a premium.

Today, the Metropolitan Museum of Art and Airbnb launched a partnership that will allow visitors to rent out several of the institution’s historical rooms for a night at a time. The announcement comes after reports that the Upper East Side museum, which was the second-most-visited in the world last year and had a budget of roughly $300 million, is facing a budget shortfall of $10 million. Now, as it looks to capitalize on its collection in unconventional ways, the Met is hoping it can replicate the kind of viral success the Art Institute of Chicago enjoyed recently with its Vincent van Gogh-themed Airbnb partnership.

“The Met has one of the richest collections of meticulously preserved and exquisitely finished historic interiors in the world, and it’s time we monetized those holdings,” the Metropolitan Museum’s President, Daniel Weiss, told Hyperallergic. “Imagine waking up in the exquisite, 18th-century Damascus Room and then strolling through the Ancient Near Eastern Art galleries to have a quiet breakfast at the Great Hall Balcony Bar before any other visitors  have even entered the museum. We hope these kinds of experiences will give our public a more intimate appreciation of our collection.”

The partnership, officially dubbed “The Metbnb,” will require extensive collaboration between the museum’s conservation, security, cleaning, and catering staff to ensure a safe and comfortable stay for renters, but outgoing Met director Thomas P. Campbell is certain they are up to this unconventional challenge. “We’re a 21st-century museum after all,” he said. “Digital engagement has been one of my top priorities over the last eight years, and projects like this one show how digital initiatives can translate directly into people coming to the museum and experiencing its collections in new ways.”

Visitors hunting for bargains on Manhattan accommodations will have to look elsewhere, though, as Metbnb pricing seems to be targeted at the luxury tourism market and wealthy New Yorkers looking to book an exclusive staycation. The Frank Lloyd Wright designed Little House is renting for $2,500/night, while the ancient Roman Villa of P. Fannius Synistor room can be procured for $2,000/night. On the extremes is the extravagant bedroom from the Venetian Sagredo Palace, which is renting for $5,000/night, while the 18th-century New York Dutch Room can be snagged for the almost affordable $1,300/night.

The historic rooms are available to rent through Airbnb as of today, April 1, and several have already been booked. A few early bird VIPs have already been given access to the rooms and left reviews for future visitors. “I usually stay at the Trump International,” said Michael D., an Airbnb user and financial analyst from London who will be spending a night in the Worsham-Rockefeller Dressing Room when he comes to town for Frieze New York in early May. “But my room at the Met looks a lot more tastefully decorated and is actually cheaper by a few quid.”

Though Metbnb is the museum’s first successful project with an e-commerce site, it will surely not be the last — nor was it the first option Campbell explored. “Late last year, we started testing a project with Uber that would have allowed people strolling in Central Park to call for a ride in our Etruscan bronze chariot from the 6th century BCE,” he said, “but the conservation department put a spoke in the proverbial wheel.”