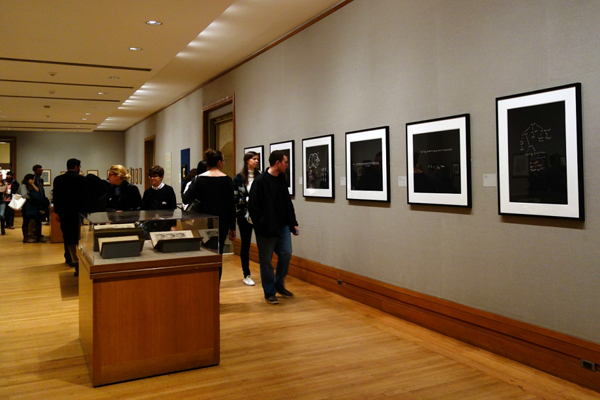 Installation view of Picturing Math: Selections from the Department of Drawings and Prints at the Metropolitan Museum of Art (photo by the author for Hyperallergic).

In 2015, the Metropolitan Museum of Art acquired a series of prints of the most beautiful equations, as drawn by 10 prominent mathematicians and scientists. Mathematician Stephen Smale, for example, chose the relatively simplified numerical analysis equation known as Newton’s Method, first published in the 17th century, while theoretical physicist Steven Weinberg’s demonstration of the Lagrangian of the Electroweak Theory, which contributed to his 1979 Nobel Prize, flows over four dense lines. The 10 prints of mathematical expressions known as the Concinnitas portfolio are the core of Picturing Math: Selections from the Department of Drawings and Prints, currently on view in the Met’s Robert Wood Johnson, Jr. Gallery.

Farrell, who organized Picturing Math, added that the Concinnitas portfolio was of interest to the Met because “it made visible the strong links between art and math, something artists and mathematicians have engaged widely over the centuries.” In the exhibition, the portfolio is joined by printed work dating back to the 15th century.“As each print reflects a different formula written in a different hand by a different author, there are great variations in color, tone, script, and amount of detail present in each work,” Jennifer Farrell, associate curator of drawings and prints at the Met, told Hyperallergic. “Together, the prints show not only the diversity of ideas proposed by some of the leading scientific minds, but, in a larger sense, challenge the very notion of ‘beauty’ and divisions between art and science.”

Concinnitas arose from a chance meeting between mathematician Daniel Rockmore of Dartmouth College and publisher Robert Feldman of Parasol Press, who sat next to each other on an airplane and ended up talking about art and math. They named the portfolio, printed as aquatint diagrams by the New York print studio Harlan & Weaver, after a Latin word coined by Renaissance scholar Leon Battista Alberti to describe a perfectly balanced, “beautiful” work of art.

Alongside the Concinnitas prints are objects like a 1525 woodcut of a spiral by Albrecht Dürer, 1528 perspective drawings by Peter Flötner, and 19th-century gridded chalk studies by Victor-François-Eloi Biennourry. Often in these older works, math is allegorical rather than formulaic, its systems broadly used to convey the order and balance of the world. In Georges Reverdy’s 16th-century etching “The Architect,” geometry is portrayed as a woman creating a five-pointed star in a circle, while classical ruins stand behind her, all symbolic of math’s role in the process of architectural creation.

Picturing Math also includes several modern and contemporary pieces showing how artists have more recently experimented with mathematics. “Dorothea Rockburne’s work, for instance, reflects the influence of the mathematician Max Dehn, whom she met at Black Mountain College; the artist employs the ‘golden mean,’ a mathematical concept artists have employed since antiquity to identify the ideal ration for balance and beauty,” Farrell said. “By contrast, artists such as Jasper Johns and Suzanne McClelland employ numbers and mathematical symbols, seemingly emptied of meaning or in an absurdist manner.”

Displayed together, the historical and contemporary works in the small exhibition chronicle centuries of sharing and considering mathematical knowledge through art, design, and publishing. As Farrell explained, “For this display, we wanted not only to highlight the Concinnitas portfolio but also, using our collection, show just some of the many ways artists, architects, and theorists have focused on the visualization of math and the incorporation of mathematical concepts in Western graphic arts from the 15th century to the contemporary period.”