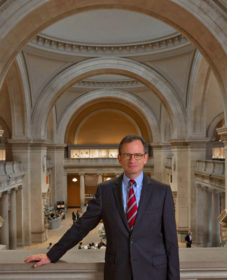 The President and CEO of the Metropolitan Museum spoke to Hyperallergic about the new admissions policy and what it means for visitors.

Last Thursday, the Metropolitan Museum of Art announced its first new admissions policy in decades, which charges out-of-towners full price while New York residents continue to pay what they wish. Some critics have been very vocal about their belief that museums should be free — and who can argue with that sentiment, even though it’s important to note that the Met Museum has never been free (visitors currently have to pay something, even if it is only a penny).

The realities of museums may been complicated, but it was already well-known that the museum was at risk of having a $40 million deficit. Sure, New York state residents and students from Connecticut and New Jersey will continue to enjoy the pay-what-you-wish policy, but is that enough? It certainly feels like a giant shift is taking place at an institution that is commonly referred to as one of the greatest museums in the world.

We spoke to Met Museum President and CEO Daniel H. Weiss about the new policy and how it fits with the museum’s larger vision.

The interview has been edited for clarity,

Hrag Vartanian: ​Do you think museums should be free? Should that be a goal, or something to strive for?

DHW: Yeah. I think there’s no question, that it’s in society’s interest, for all of our interest, for people to have as ready access as possible, to art and culture. That it enriches our lives, it elevates our empathy, it allows for more meaningful and productive day-to-day life, if we can connect to the kinds of work that people at the Met do. So ideally, access matters a lot.

HV: ​Do you think the Met should strive to be free?

DHW: Well, I think, the reason I’m not answering your question directly, is … let me think out loud with you for a second.

DHW: I think what I said is the most important thing. That we should strive to make the institution accessible. If that means that it would be possible for us to be free, that would the best possible solution. Except, that it is never free. I don’t think the question is “Should it be free?” the question is “Who should pay?” Because if it’s free, then who’s paying? The Federal Government?

DHW: There are always questions associated with “What does an institution do?” or “How does it function?” depending upon who’s paying. So, what I am in favor of is what I would call a model of co-investment. Where everyone who benefits, directly or indirectly from the work of this institution, has an obligation to the degree that they can, to pay something. That was the beauty of the ‘pay-as-you-wish’ policy. Because it was the perfect realization of that spirit.

People who could pay a lot, could pay a lot. People who can’t, could come anyway, and pay a little. But if everyone pays — the city, the Federal Government, philanthropic support, the public — if everybody paid, if we had this model of co-investment, then we’re not accountable in any excessive way to any particular influence.

​But for various reasons, over the past 10 or 12 years, the pay-as-you-wish policy has failed. It has declined by 71% in the amount people pay. So the question then is who’s responsibility is that? It’s a social contract that no longer works.

HV: ​In a document on the new admission policy, which was published under your name, there’s a mention that in the past 8 years alone visitors have increased by almost 40%. So, I think, for a lot of people there is a disconnect between, how there are so many more visitors, but admissions are still a problem. How would you respond to people who see a disconnect with those figures?

DHW: During the last period of time, we’re talking about, let’s just say, the last 5 years we’ve seen visitation increase dramatically. At the same time, the amount of money people are paying, has decreased dramatically. So that during the last 5 years, we’ve seen no growth in revenue. Our costs have grown, because, you know, we have to pay people, and be a functioning entity in the economy. But we’ve had no growth in revenue.

So the increased numbers of visitors, have offset the reduction of paying, but we’ve made no progress.

HV: ​​Got it. And, so what is the projection? Because paid admission represents only 15% of overall revenue. What percentage are you hoping for?

DHW: We’re seeking a modest increase in the amount the public contributes to our budget. We are imagining, we are planning, that we’ll go from 14% of our budget, to about 16, or 17%. That will increase our revenues by somewhere from 6 and 11 million dollars. We don’t want to burden the public with too much of this responsibility, as we don’t think that’s appropriate either. We’re just looking to get the balance right.

DHW: ​I think, that that argument is actually quite specious. And I’ll tell you why. First of all, the Metropolitan Museum is already more actively supported by donors than any other cultural institution in the United States. ​75% of our budget is paid for by gifts from donors. ​Either directly, today, or through the endowments that we’ve built up, one gift at a time, from our donors.

Moreover, 100% of our art collection has been built by donors. This institution was not built on a royal collection, like the Louvre was, for example. Or on imperial collections, like the British Museum. It was built one gift at a time, from the citizens around us.

So the donors already carry the vast majority of the burden of co-investment in this institution. Now let’s turn to David Koch. He was approached as a member of our donor community, [because] we actually had a plaza that needed to be renovated, for various logistical infrastructure reasons. The plaza had to be renovated, and we asked him to pay for it. So he did. And, as you know, there are always many needs institutions have, that we asked donors to pay for. We didn’t ask him to offset an admissions policy, that was failing, because the public was no longer contributing to it. I’m not sure, morally even, that’s an appropriate question to ask him.

HV: ​So how about in terms of the sensitivity people have toward this idea of carding? Because there have been statistics that show that people who do not carry ID are disproportionately people of color. Of course, undocumented immigrants are impacted too. And I’m just wondering, whether that’s a sensitivity for the museum, and how the museum plans to deal with that criticism?

DHW: Well, that scenario is a great sensitivity. I wouldn’t call it a criticism, I would call it a concern.

DHW: And if we’re gonna do this, how do we make sure we do it, so we don’t do harm to the issue around people’s rights to privacy, the sense of acceptability that we want people to have about this museum? So let’s say, for instance you’re an undocumented member of the community. Are you gonna feel like you’re welcome at the Met?

​Well, we are working really hard to address that issue in the following ways. First of all, you can have an IDNYC card, and when we begin this policy, for several weeks, you will be able to come in and get an IDNYC card, which allows you to have access to any number of cultural institutions and other kinds of places in New York.

HV: ​So, there will actually be a place in the museum where you can go and get a card?

HV: ​And how long will that last?

So, the idea there is, again, we want to encourage people to come. And then, as we have said, we’re going to be very flexible about how people demonstrate residency. And we’re not recording any of that information. We’re not going to write down people’s ID. We’re just going to consult it, in order to make sure that they live in New York, and then we’re gonna give them an admissions ticket. It’s done successfully in other cities around the country.

HV: ​According to the information provided by the Met, a current bill or bank statements with a New York State address can be used to prove residency. Does that mean that picture ID won’t be required?

DHW: Correct. We actually included a library card, and that does not have picture ID.

HV: ​​Okay. Now how about in terms of those who view this as part of a larger push towards the privatization of public resources and the commodification of art? Some people are saying “Well, this is just another way to make it a little bit more exclusionary.” How does that factor into this thinking?

DHW: So again, I think, the practical problem before us is how do we keep this community resource working for everyone? And that involves the commitment from everyone to its well-being. So, we have to rely more heavily on our donors, doesn’t that make us more exclusionary, rather than less exclusionary? All we’re asking, is for all the members of our society to participate in the well-being of the institution, to help the well-being of the institution function. So I think in the end, that’s not exclusionary, it’s actually the opposite. And the practical question of what does it take to support an organization that doesn’t get federal funds?

The practical question is “Who’s supposed to pay?” If the public doesn’t wish to pay, who should pay?