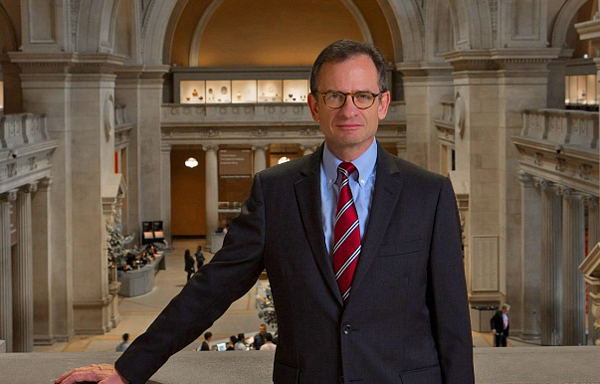 The Met’s president and CEO Daniel Weiss (Photo: © The Metropolitan Museum of Art).

The Metropolitan Museum of Art’s board of trustees has named Daniel Weiss as chief executive and has launched the search for a new director to replace Thomas Campbell, who left this month.

Weiss, who has been the museum’s president since 2015, will now serve in both roles, an organisational shift for the museum. Previously, it was the museum’s director who held the joint position of chief executive.

Asked about the reason for the change, Weiss says: “My sense is that this is a particular moment at the Met, and I have a particular background that allows me to contribute meaningfully to all sides of the institution.”

As chief executive and president, Weiss will oversee the administrative operation of the museum, leaving the director to look over the museum’s “core mission”: its curatorial focus, publishing programme, conservation efforts and library.

The organisational change is the result of a three-month study of comparable institutions and an internal review that included 60 Met board and staff members.

The search committee to replace Campbell, who announced his resignation in February, has also been formed. It includes the collectors J. Tomlinson Hill, Dasha Zhukova and Daniel Brodsky, the chairman of the board of trustees, among others. There is no timeline on the appointment of a new director.

Positions Vacant » View All
» Training Officer – Sydney Living Museums
» Head of Digital Engagement & Insight – ANMM
Latest News » View All
NAA’s national collections on brink
& Australia’s history at risk Read more.
Frog love songs reveal amphibian decline
AM & Frog ID explore habitat modification Read more.
QM explains mystery: ‘Giant moth invasion’
of Mt Cotton State School's surprise visitor Read more.
ANMM Haenyeo (sea women) exhibition
Hyungsun Kim's S Korean divers portraits Read more.
Social Media Benchmarking: Evaluation
in action at the Cleveland Museum of Art Read more.
Top +
Council of Australasian Museum Directors, c/o Ms Daryl Karp, Museum of Australian Democracy at Old Parliament House PO Box 3934 Manuka, Australian Capital Territory 2603 Australia, © CAMD 2021
Copyright: All information and resources provided on this website remain the copyright of the Council of Australasian Museum Directors. Permission is granted for viewing and downloading for personal and not for profit purposes. Those wishing to reproduce any materials for commercial, educational or other uses are requested to contact us.
Disclaimer: The content of this website is provided for information purposes only and is not intended as a substitute for professional advice. No claim is made as to the accuracy or authenticity of the content of the website. The Council of Australasian Museum Directors does not accept any liability to any person for the information or advice (or the use of such information or advice) which is provided on this website. The information on our website is provided on the basis that all persons accessing the site undertake responsibility for assessing the relevance and accuracy of its content. No responsibility is taken for any information or services which may appear on any linked web sites. Hostgator.
.