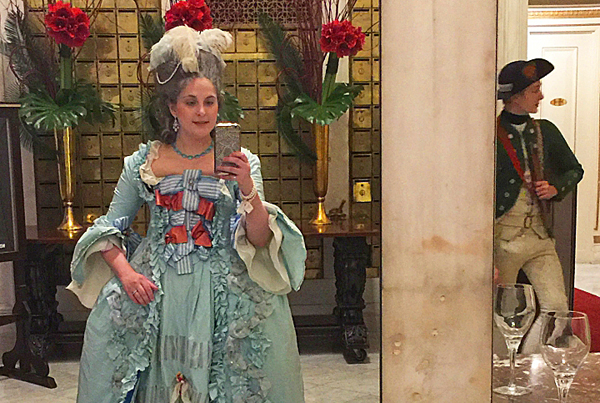 Eliza Vincz in the 18th-century style robe à la française that got her denied entry to the Metropolitan Museum. (photo courtesy Eliza Vincz).

On Saturday, a historian wearing her handmade robe à la française style dress was barred from entering the museum to take part in a tour.

If it’s not the night of the Met Gala, guests in elaborate dresses may have a hard time getting into the Metropolitan Museum. On Saturday afternoon, a woman wearing a handmade dress in the 18th-century robe à la française style was barred from entering the institution.

Eliza Vincz, a historian specializing in 18th-century fashion and politics, had arrived at the museum to participate in a “Fashion and Beauty Tour” led by Shady Ladies Tours founder Andrew Lear, an art historian and scholar. She was wearing a gown of blue silk taffeta and silk organza in the style of dresses worn around 1765–1775, as found in portraits from that era (and somewhat similar to a dress from that period in the Met’s permanent collection). But as the group entered the museum, a security guard took exception to Vincz’s conspicuous couture.

“I was really looking forward to this, I had planned it back in December with [Andrew Lear], and had done a promotional video and everything,” Vincz told Hyperallergic over the phone. “We were getting ready to start the tour, we were gathering everybody, and the next thing I knew this security guard came up to me and she said, ‘Excuse me ma’am, you can’t have outside artwork in here, you need to leave.’ And I said, ‘I’m actually here with the Fashion and Beauty Tour, I thank you for seeing this as art,’ and then she says: ‘We have costumes, did this come from the Costume Institute?’ She was implying I was stealing, which is the best worst compliment I could ever get, because on the one hand you’re accusing me of theft, but then on the other hand you think my outfit is so convincing that it’s an original. So I was angry and slightly flattered.”

Once it became clear that she would not be allowed into the museum to participate in the tour, Vincz gave an abridged version of her presentation before leaving the museum.

“I came all the way from South Jersey to do this,” Vincz, who lives in Burlington, New Jersey, added. “I have done other talks on 18th-century clothing and fashion, it’s actually my job, I teach history through talking about it and showing it, so I show the fashion aspects of it and the political aspects of it. I thought the Met would be the perfect place, it was kind of a dream of mine to do this, so when I was thrown out it became something of a nightmare.”

In response to Vincz’s story, first reported by the New York Daily News, a spokesperson for the Metropolitan Museum told Hyperallergic that the institution has no specific ban on costumes. However, security staff have leeway to prevent people whom they deem potentially disruptive to the overall visitor experience from entering.

“The Met doesn’t have a dress code, but there are guidelines for what visitors can bring in and what activities are allowed in the galleries,” the spokesperson said, “and the Museum’s security officers are also there to ensure that anyone entering the building isn’t going to unnecessarily disturb fellow visitors or put the art at risk.”

Vincz, who had volunteered her time to help out with Saturday’s tour, had hoped to educate and enlighten rather than disturb other visitors. She had spent more than a month sewing the gown for the occasion.

“It’s completely handmade, there’s no sewing machine work in it at all, it’s all done by hand,” she said. “I actually had to hand-sew Edwardian-era sequins onto it because I prefer using antique or vintage details, which make it more real. I had on original 18th-century jewelry. Normally I get paid to do these things, this is my job, but this time I was doing some volunteer work.”

The next “Fashion and Beauty” tour of the Met is scheduled for March 3 though Vincz isn’t slated to participate.