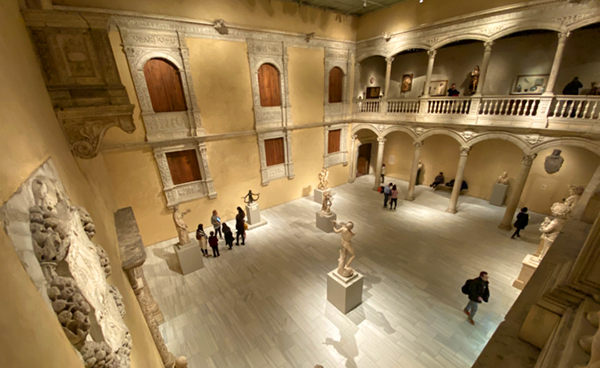 The Metropolitan Museum of Art in New York (photo by the author for Hyperallergic).

A $5 million gift from philanthropist Adrienne Arsht will be used to pay future interns at the NYC museum.

It took decades, but it finally happened: Interns at the Metropolitan Museum of Art in New York will no longer work for free.

In an announcement yesterday, August 3, the museum said that future internships will be paid for with a $5 million gift from art philanthropist Adrienne Arsht. (While its summer Museum Seminar (MuSe) Internship Program is paid, the museum also offers a number of unpaid internships.) The “transformative gift” will also be used to support the MetLiveArts performance program.

Max Hollein, director of the Met, said in a statement, “These funds will activate a landmark shift in The Met’s expansive and multidisciplined internship program, enabling greater inclusivity and access while also significantly furthering the Museum’s continued dedication to engaging with diverse contemporary performance artists through groundbreaking live arts commissions.”

“Paid internships are an important step towards increasing opportunities and supporting equity in the art field,” Arsht said. “This, along with an enduring focus on themes of resilience, lifting up artists from a variety of backgrounds through the Museum’s performance programming, forms the foundation of my gift.”

Arsht, a former Florida banker, made a $30 million gift to Miami’s Performing Arts Center in 2008, which secured the struggling center’s financial footing. (It was subsequently renamed to the Adrienne Arsht Center.) In 2012, she made a $10 million donation to New York’s Lincoln Center; a stage in the center’s Alice Tully Hall was subsequently named in her honor.

The decision marks a stark contrast in the museum’s budgeting priorities. While launching its unpaid internship program in 1967, the museum decided to dedicate an entire endowment fund, gifted by Lila Acheson Wallace, to permanently refresh the flower arrangements in its Great Hall.

And while interns were asked to labor for no wages, top executives at the museum have netted five and six-figure salaries. Tax filings from 2018-2019 show that the museum’s highest-paid executive, chief investment officer Lauren Meserve, earned a salary of $1.6 million. The Met’s president and CEO Daniel H. Weiss earned $1.25 million, and Hollein, who entered his position at the start of 2019, made $764,093 in the six-month period. Weiss and Hollien’s salaries were cut by 20% to cope with a $150 million shortfall caused by the pandemic. The salaries of 11 other museum officers were cut by 10%.

The Met has not yet responded to Hyperallergic’s inquiry about the rate or frequency of wages that will be paid to new interns.

Unpaid internships are one of many art world maladies that perpetuate inequality. In 2019, the Board of Trustees of the Association of Art Museum Directors’s (AAMD) — a body that represents 227 art museum directors in the United States, Canada, and Mexico — issued a groundbreaking resolution that urged art museums to start paying their interns.

However, AAMD’s resolution lacked any binding forces, and it left the decision to compensate interns in the hands of museum managements (and acknowledged college credit as an acceptable form of compensation in lieu of wages). An art world trendsetter, the Met’s overdue but welcomed change of policy might lead other museums to follow suit.