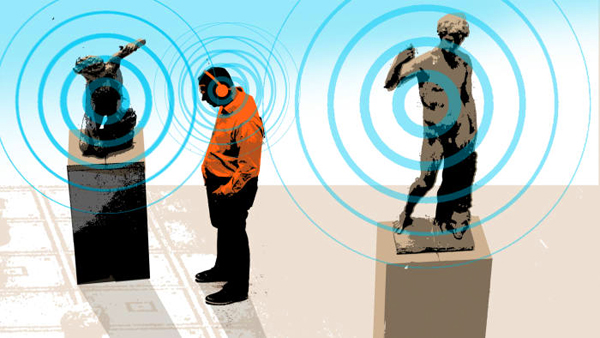 Growing up in 1980s Britain, going to an art museum was a predictable affair: there would be pictures on the wall, a dull booklet and a hushed silence broken only, if you were lucky, by a tour guide.

Last weekend, I went to see a new exhibition on the court of Versailles at the Metropolitan Museum of Art in New York. It had the expected dazzling objects and art, including Josef Hauzinger’s famous portrait of Marie Antoinette.

But there were also headsets available, offering a “binaural” experience that plunges you into the sounds that somebody in 18th-century Versailles might have experienced — footsteps crunching on gravel streets, era-appropriate music or background chatter — while you look at the art.

This is presented in a seemingly “real-life”, three-dimensional way, interlaced with actual comments from 18th-century visitors to Versailles, taken from historical accounts. The voices cheerfully gossip about everything from the king’s mistress, Madame du Barry, to Marie Antoinette’s parties, in a bid to make the artefacts feel more “real”. The acoustics were recorded in a stately home and the result feels powerful, “real” — and spookily convincing.

“It’s the first of its kind at the Met,” says Nina Diamond, a producer in its digital department. “We wanted to create an audio experience that brings alive the accounts of 17th- and 18th-century visitors to Versailles. Dramatising them in immersive 3D soundscapes gives listeners the visceral feeling that they’re eavesdropping in the palace.” (A similar binaural audio experience is offered by Historic Royal Palaces in the UK.)

Is this a helpful direction for art to take? It is a debate that will become increasingly heated in the coming years, as museums scramble to attract more customers and digital disruption reshapes how we define education and entertainment in the wider world.

Museums have long offered performance innovations to give their exhibits more power; think, for example, of son et lumière displays at historic buildings. Most museums already use computer displays to provide information about exhibits, sometimes in an interactive form. Some are also putting their displays online, so that they can be viewed remotely around the world. A few are even experimenting with virtual reality. Google has partnered with several museums to offer remote viewers 3D images of galleries, including the Dulwich Picture Gallery in London.

But these technologies present challenges. You cannot use a VR headset while also looking at art. So some museums are contemplating offering an augmented-reality experience (in the form of glasses that present overlaid information about what you look at). The binaural experience presents another way to “look” at art in an augmented way — through your ears. It sounds exciting to some people. But it also raises some philosophical issues. Given that we spend so much of our time in cyberspace, with “fake” images, do we risk undermining the power of “real” art if we look at it with digital devices? Will we lose sight of the original art and its value? After all, the works were generally created to be viewed by the naked eye, not via a smartphone. Does the introduction of digital technology enhance our appreciation of art, or is it just an expensive distraction? Views vary.