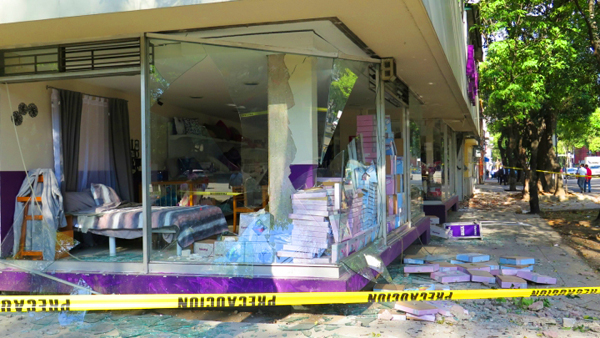 Some galleries suffered severe damage, others turned their spaces into relief centers, and the city’s biggest art fair came under fire for going ahead with its scheduled VIP opening the night of the quake.

MEXICO CITY — Just over a week after a 7.1 magnitude earthquake struck on September 19 — the anniversary of a quake that killed thousands in 1985 — sending this city reeling into chaos, buildings tumbling to the ground, and killing hundreds, the damage to the art community is beginning to come into focus. A handful of galleries and museums were affected to varying degrees; several others suspended shows and opened their doors to collect donations for victims and volunteers. Meanwhile, the city’s biggest fair, Zona MACO, came under fire for going ahead with the opening festivities of its photography and antiques fairs the evening after the earthquake, seemingly unconcerned about the devastation. On the other hand, the week’s other marquee art event, Gallery Weekend Mexico, has been indefinitely suspended.

Early reports indicated that museums in the affected area escaped largely unscathed, though details are slowly emerging about the extent of the damage to patrimony and cultural institutions. Luckily, many of the institutions here occupy some of the oldest and most solid colonial buildings in the Valley of Mexico, and each has survived scores of earthquakes. Some newer buildings were not so lucky, though more strict building regulations were put into place two years after the devastating1985 earthquake.

The Museo Nacional de Arte (MUNAL) suffered minor damage to its facade, according to images posted on Twitter. Several sculptures were toppled in the Metropolitan Cathedral, while several dozen historic churches and convents in the states of Morelos, Puebla, and the State of Mexico collapsed or suffered serious damage, according to El Universal and other media outlets. El Museo Casa de Alfeñique, a classic example of baroque architecture in Mexico, was also damaged, but will be repaired and restored by the National Institute of Anthropology and History, according to La Jornada.

As for the city’s galleries, Arroniz Arte Contemporaneo was seriously damaged. “Dear friends, we are working on the rehabilitation of the gallery,” a post on the gallery’s social media accounts on September 20 explained. “It will remain closed until further notice.” The young project space Biquini Wax — a gathering place, gallery, and studio for transgressive ideas about art with an international fanbase — also suffered major damage. “We still don’t have the final diagnosis about when or whether or not we will be able to continue operating,” one of the founders, Cristóbal García, told Hyperallergic. A one-of-a-kind film archive, the  Permanencia Voluntaria Film Archive, also fell victim to the violent quake.

Even though the campus and galleries of the Centro Nacional de las Artes (CENART) suffered cracked walls and fallen ceilings, as seen on Twitter and El Universal, it continues to serve as a collection and distribution center for donations going to earthquake rescue and relief efforts even as repairs are being made. Pamela Echeverría, the founder of Labor Gallery, didn’t hesitate to open the space as a staging center for donations on the day of the earthquake. The gallery has now resumed normal programing. Other spaces that suspended their programing in order to offer up their spaces included Marso Gallery and Galeria Alterna. Still many more gallerists, curators, critics, and artists — the entire city — rose up to help rescue their neighbors and give to strangers with a spirit of generosity that has been keeping the city afloat in the days since the earthquake.