CAMD Chair, Patrick Greene (CEO, Museum Victoria), recently participated in the awarding of the Luigi Micheletti Award which is the European prize for innovative museums in the world of contemporary history, industry and science . Up to and including the 2010 competition, candidates were drawn from the list of applicants for the European Museum of the Year Award, which is administered by the European Museum Forum.

Press Release, 2015 Micheletti Award, Success for the National Archives of the Netherlands, 9 May 2015 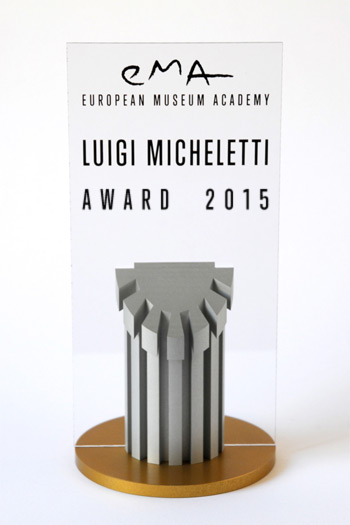 At a ceremony held in the Salone Vanvittelliano at the Palazzo della Loggia in Brescia, The National Archives of the Netherlands was announced as the winner of the 2015 Micheletti Award. The trophy was presented to the Archives’ representatives, Astrid Hertog and Nancy Hovingh. Representing the Luigi Micheletti Foundation was René Capovin. A strong delegation from the European Museum Academy, which was responsible for the selection and assessment of candidates, was also present.

The National Archives of The Netherlands is an authority in The Hague under the Dutch government with the primary task of collecting and preserving records from the government and all its agencies as a documentary-based guarantee for the legal rights and obligations to the population and public authorities. Since 2002 the National Archives has pursued a new strategy in its approach towards the public handling of the nation’s memory, intending to make it more accessible to a much wider public through increased democratisation and participation. A new Visitor Centre was opened in October 2013 by King Willem-Alexander, with a large exhibition entitled ‘The Memory Palace’. This aimed to present the extensive archival collection in an innovative, surprising way, with 11 stories of varying length taking the visitor on a journey through The Netherlands from the Middle Ages to the 1970s. Eleven artists, game developers and producers from other creative sectors were asked for their interpretation of the stories, which could also be seen as stand-alone productions. The exhibition was accompanied by an educational programme, and visits to it were part of The Hague Culture Menu, a programme in which about 75 groups in Year 8 of primary schools visit the Archives.

The judges said: “This exhibition was excellently conceived and excitingly presented. The National Archives of The Netherlands is, of course, first and foremost an archival organisation and as such primarily preserves written documentation from Dutch society. But it has also realised something which may sound obvious. The collections are not only documentation for researchers in the reading room but are also material heritage in the same way that museum objects are. Exactly as in a museum that means that the archival collections can be used for exhibitions and educational purposes where the institution wants to tell a story and make a point. This is very natural for a museum to do, but the National Archives demonstrates that even an archival institution can do that when the will is there and the mind is set. The exhibitions and educational programmes are of a standard as high as any museum and the National Archives of The Netherlands sets a very good example for other archival institutions. It is first of all a question of will and courage.”

This year a Special Commendation was given to the Maritime Museum of Denmark at Helsingør. The museum was housed for 98 years in the medieval Kronborg Castle, before it moved to the old Helsingør Shipyard’s dry dock nearby, reopening to the public in October 2013. The civil engineering and construction work required were among the most complicated ever undertaken in Denmark, one major problem being that the floor of the dry dock experienced upward pressure from the ground water underneath. As it is in a conservation area needing a clear view of the Castle, the museum was not allowed to have any part of its building above ground, with a result that is both ingenious and spectacular. The new museum concentrates on eight themed exhibitions on aspects of Denmark’s maritime history, in displays on two levels of sloping floors.

Topics include transportation, science, navigation and commerce. The museum has moved away from traditional displays, focussing on the creation of narrative environments and creatively designed spatial experiences that mix theatrical elements, multiple layers and multimedia components. Spaces change from the open sea to the confined interior of a ship, and the style of display changes accordingly. Visitors are encouraged to participate, taking the part of a merchant in a trading simulation, and as a shipping employee, handling bulk carriers and tankers in a present-day environment. The museum produces at least two temporary exhibitions a year, there is a large auditorium, a shop and a café run by the museum.

The judges said: “The museum meets all the standards for this award and it does that on a very high level with its original setting in a former shipyard, its innovative and daring architecture inside a dry dock as well as a display that is perfectly integrated in the building. It delivers a strong personal experience induced by an emphasis on storytelling with the help of high performance multimedia and interactive displays. The museum has broadened the traditional themes of a maritime museum and brought into focus additional aspects of the life and work of people who earn their living at sea, especially in the commercial field.”

In its exhibition the DASA (first winner of the Micheletti Award in 1996) shows themes of the world of work from the past, present and future. The aim is to address not only experts in this field, but also, as the principal target group, the broad general public. The DASA is thus endeavouring to achieve effectiveness on a social level. The presentation of old, modern or future worlds of work, while at the same time focusing on man with all his concerns, needs and abilities, is very rare. That is why the DASA wishes to present other museums with the DASA Award and accord them recognition for their presentation of the world of work.

The winner this year is MAGMA Museum of Arts in Iron in the Maremma, Follonica, Italy. Follonica was the centre of an important iron industry which was dedicated to cast iron and which ended in the 1960s. The visible remains fell into disuse until MAGMA opened to tell the technological, artistic and human story of the ironworks in its heyday, at the peak of its production which was inextricably linked with the history of the European steel industry. Housed in the restored Saint Ferdinand Furnace, the city’s most historic building, its old walls stand side by side with modern multimedia technology. The exhibitions tell the story of the birth of the community and of the factory town, and the interrelations between humans and their environment.

MAGMA’s multimedia galleries and historical photographic and film archives can be accessed online, and visitors are encouraged to add their own contributions to them. In the documentation centre the public can consult the museum’s database of casting files, iconographic sources and video footage. There is also a section devoted to the publications of the history of the iron industry and of industrial archaeology.

The judges said: “The museum is an important monument for the city, with strong roots running deep into the heart of the territory and its people. The human stories of the workers are sometimes forgotten in aspects of industrial history, but the museum succeeds in bringing past generations to life again and making the current generation aware of the harsh conditions endured by their forefathers. It is a collective story that is much more than a museum in the traditional sense and is made up of many voices with which we can identify, not only through technology but also on the intellectual and emotional levels.”

THE EUROPEAN MUSEUM ACADEMY (EMA) is a non-profit Foundation established to reflect museums at the international level, to promote research on museography and museology as a high cultural activity, to provide constructive criticism and promote discussion on new exhibitions and museums, and to diffuse museological knowledge and ideas among members of the profession. It aims to promote the conception and development of new as well as of traditional museums as tools of social change. The Micheletti Award is organised to illustrate best museum practice, in co-operation with the Micheletti Foundation, Thirty-two countries are currently represented within the European Museum Academy organisation. www.europeanmuseumacademy.eu.

THE LUIGI MICHELETTI FOUNDATION (Fondazione Biblioteca Archivio Luigi Micheletti) The Foundation (established 1981 in Brescia) is a research centre specialising in 20th-century history. It has been leading the debate on industrial archaeology in Italy and has concentrated so far on the history of technology, work and industry. It has also played a key role in the setting up of musil (the Museum of Industry and Labour), which consists of three complete and functioning areas: the Museum of Hydroelectricity in Cedegolo (Camonica Valley, Brescia); the Museum of Industry and Work in Rodengo Saiano (Brescia); and the Museum of Iron in San Bartolomeo (Brescia). www.fondazionemicheletti.it;http://www.musilbrescia.it. www.luigimichelettiaward.eu

THE PANEL OF JUDGES