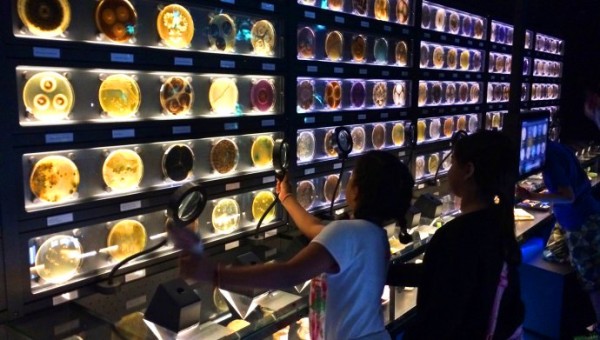 Micropia, a shrine to the super-small. Source: The New Yorker. Photo: Ed Yong.

On a warm summer afternoon in Amsterdam, a line of visitors snaked toward the entrance of the Artis Royal Zoo, queuing to see the typical assortment of elephants, giraffes, penguins, lions, and so on. I, however, was more interested in the building opposite the ticket booths, which had a very different menagerie inside. A large banner draped over the building’s two stories displayed a collection of fuzzy colored balls, shaped like a waving person. This towering gestalt figure represented the human microbiome—the trillions of bacteria and other microörganisms that inhabit our bodies. With its purposeful stride and genial wave, it welcomed passersby into Micropia, the world’s first museum devoted entirely to microbes.

Micropia launched in September, 2014, after twelve years of development and ten million euros of investment. None of the creatures in its exhibits is bigger than an ant, and most are substantially smaller—zipping water fleas, invincible tardigrades, green algae, and innumerable bacteria. The place is a shrine to the super-small, a haven for charismatic minifauna, a place where the cages and paddocks of the neighboring zoo have been swapped for agar plates and glass slides. The fact that it exists at all is a tribute to the growing realization that the great majority of microbes are neither signs of filth nor bringers of disease but vital parts of the world around and within us.