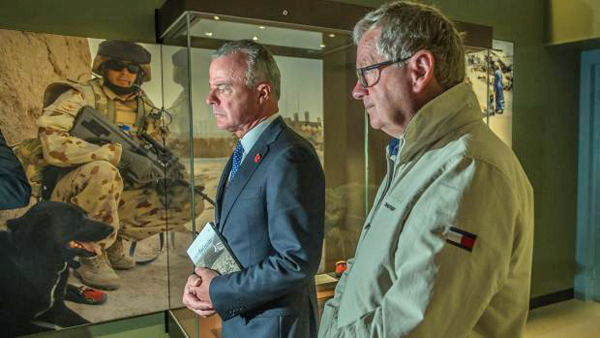 Integrating back into an indifferent society after experiencing the horrors of war is far from easy. But award-winning journalist Chris Masters hopes his new documentary exploring the impact of the Afghanistan war on Australian troops reduces this indifference even slightly.

He said that soldiers revealed painful memories they’d kept from their own families in his work, which was launched alongside the Australian War Memorial’s new exhibition about Australia’s involvement in the Middle East.

The AWM launched the exhibit and Masters’ documentary on Wednesday, and Memorial director Dr Brendan Nelson said he was touched at how it changed people’s perception’s of war.

“One airforce officer said one of the guys she worked with had a wife who hated the military, hated the airforce an hated the fact he’d been away for so long,” Dr Nelson said.

“And then when he brought her to see it she broke down in tears and said ‘I’m sorry, I get it”.

Dr Nelson said he knew there was a need for the memorial’s Middle East exhibition when he visited Afghanistan as Australia’s ambassador to NATO.

Positions Vacant » View All
» Te Ao Māori roles – Canterbury Museum
» Producer, Public Art Program – Queensland Museum
Latest News » View All
Coming to terms with nature & ticking clock
Questions Raised by Quolls Harry Saddler Read more.
‘… frogs also dealing with a pandemic’ AM’s
Jodi Rowley – researchers at work on mystery Read more.
SAM co-ordinating Insect Investigators
in regional schools in Qld, SA & WA Read more.
Te Papa funding preserving & digitising
Spencer Digby–Ronald Woolf photo archive Read more.
MAAS Powerhouse Parramatta contract let
LendLease building 6-stars to open 2024 Read more.
Top +
Council of Australasian Museum Directors, c/o Ms Daryl Karp, Museum of Australian Democracy at Old Parliament House PO Box 3934 Manuka, Australian Capital Territory 2603 Australia, © CAMD 2021
Copyright: All information and resources provided on this website remain the copyright of the Council of Australasian Museum Directors. Permission is granted for viewing and downloading for personal and not for profit purposes. Those wishing to reproduce any materials for commercial, educational or other uses are requested to contact us.
Disclaimer: The content of this website is provided for information purposes only and is not intended as a substitute for professional advice. No claim is made as to the accuracy or authenticity of the content of the website. The Council of Australasian Museum Directors does not accept any liability to any person for the information or advice (or the use of such information or advice) which is provided on this website. The information on our website is provided on the basis that all persons accessing the site undertake responsibility for assessing the relevance and accuracy of its content. No responsibility is taken for any information or services which may appear on any linked web sites. Hostgator.
.