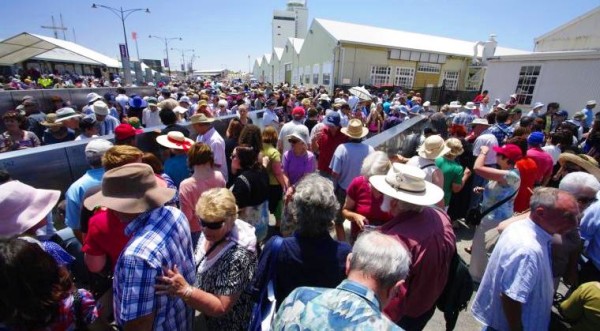 Eureka Henrich, What is a ‘migrant memorial wall’?  Blog, June 2015

When we think about memorial walls it is war memorials that most likely spring to mind – decorated with poppies or laid with wreaths, war memorials list the names of those who served, were wounded or died. In the last quarter century the ‘visual language’ of this type of memorial has been adapted for another purpose, to memorialise those who left, journeyed, and settled. Migrant memorial walls have developed alongside migration and maritime museums across the globe, offering members of the public the opportunity (for a fee), to pay tribute to friends, family members or ancestors who made new lives in a different country (there are many other types of memorials to human migration, see my previous post for a taster).

Migrant memorial walls have proved particularly popular in Australia. The Welcome Wall at the Australian National Maritime Museum in Sydney’s Darling Harbour was first unveiled in 1999, and now boasts more than 25,000 names. The Western Australian Museum began a Welcome Walls project at Victoria Quay in Fremantle in 2004, initially planning to display 2000 names. However, public interest was so strong that the initial project was extended twice, and by its conclusion in December 2010 more than 21,000 inscriptions had been accommodated. In Melbourne, a Tribute Garden opened as part of the Immigration Museum in 1998 features the names of 7000 immigrants, paid for by family members or descendants. And at the Bonegilla Migrant Experience, a museum and heritage site interpreting a former post-war migrant hostel in north east Victoria, relatives of ex-residents are invited to ‘help build a wall of memories’ by purchasing a memorial plaque for a Tribute Wall. While in Newcastle on the NSW central coast earlier this year, I was thrilled to find a new mini-welcome wall, initiated by the local maritime museum and including the names of residents who migrated to Australia under the International Refugee Organisation displaced persons resettlement scheme following the Second World War.