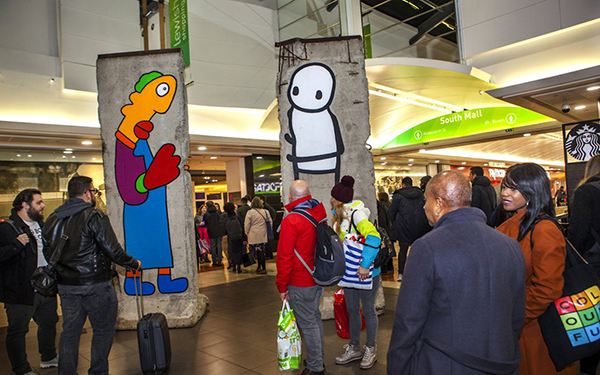 Anoosh Chakelian, “It breaks down barriers”: The museum that moved into a south London shopping centre, New Statesman, 27 February 2020

From a disused fire station to a former branch of H&M, the country’s first museum of migration, which tells stories of British identity, is struggling to find a place to call home.

Opposite Starbucks and Footasylum, two two-tonne pieces of the Berlin Wall tower above shoppers in the middle of Lewisham shopping centre in south-east London.

Looming in the central aisle of the complex, they create a gateway of graffiti and cement into Britain’s only museum of migration, situated in this unlikely venue since mid-February, squeezed between Ernest Jones and TK Maxx on the site of a former branch of H&M.

Piles of labelled suitcases, trunks and rucksacks from different eras decorate the shop front, which bears striking blown-up images of newcomers from the Caribbean waiting in a Fifties Victoria Station and a post-war ship of English emigrants setting sail for Australia.

An exhibition within called “Room to Breathe” tells migration stories through mocked-up rooms: a bedroom with framed photos and records from real-life migrants’ home countries; a kitchen stocked with ingredients from all over the world; a Turkish barber where footage of customers discussing their backgrounds beam from the mirrors; a classroom of reflections by schoolchildren, from Irish to Somali, written upon their desks.

With unused rooms waiting to be filled with this year’s exhibitions, “Departures”, tracking 400 years of emigration from Britain since the Mayflower set sail, and the story of migration and football to coincide with Euro 2020, some smaller photo displays and a merchandise shop, the Migration Museum has made a clever use of what was once an impersonal retail space. About 7,500 shoppers have walked through its doors since it opened two weeks ago.

A world away from the grand Victorian buildings and heritage houses that host the capital’s best-known museums, the Migration Museum has, rather poignantly, struggled to find a place to call home since it was founded in 2012.

Starting life through pop-up exhibitions and events in libraries and other museums, it eventually found a temporary place by April 2017 at the London Fire Brigade’s former headquarters: a draughty disused building set one road back from the River Thames in Lambeth, south London.

With the blessing of property developers seeking to turn the building into flats, offices and retail space alongside a new fire station and fire brigade museum, the Migration Museum squatted there rent-free for two and a half years. It began seeking another location ahead of planning permission being granted last December for what is now referred to as the 8 Albert Embankment development.

The museum’s founders have since struck an agreement with Landsec, the UK’s biggest commercial property developer, which runs the shopping centre. Renting the space for free, the museum covers only utilities – running mainly on grants from trusts and foundations, some private donations, and Arts Council funding for its exhibitions.

With these funds and temporary homes in privately-owned buildings, the Migration Museum is surviving where many other museums in Britain are not. According to the “Mapping Museums” project by a group of British academics, closures of museums are rising more steeply in the current period than at any point since 1960, with the closure rate accelerating to 30 per year after the financial crash in 2008. Two hundred have closed since 2010.

Outside the capital, the situation is particularly tough, with one in five regional museums at least partly closed by 2015 – five years on from the beginning of the austerity agenda – according to the Museums Association, which blamed cuts to local authority funding. “Museums are effectively a soft target” when “times get tough”, said a Museums Association policy officer at the time.

“We would like to create a permanent museum in London,” says Emily Miller, head of learning and partnerships at the museum. On a trip to France eight years ago, she recalls visiting the National Museum of History of Immigration in Paris and thinking “how do we not have this in the UK – this is mad!”

Having previously worked as a citizenship teacher, she laments learning nothing about the British Empire at school herself and believes the Migration Museum could help fill in these gaps. “I just had no idea growing up about our diversity in the UK,” she recalls. “A lot of the issues and tensions we face in the UK are because we don’t understand our history.”

Open seven days a week and free to enter, it attracts a lot of attention from shoppers. “It’s so good to have this here,” says one Lewisham resident taking pictures of the Berlin Wall outside the museum with her phone. “Shopping centres shouldn’t just be about shopping.” Visitors I hear from are particularly excited about the events, from art workshops to comedy nights, which will be held here.

“It’s a really accessible public space,” says Matthew Plowright, the museum’s head of communications. “It’s a new start-up form of museum, breaking down barriers for those who might think a museum is ‘not quite for me’.”

Others, like the Sunday Times Washington bureau chief Josh Glancy, say it’s an indictment of Britain’s connection to its history that we lack a permanent and well-established migration museum.

“They should say that,” agrees Miller. “We are working with those voices to try and raise our case for support.”

Indeed, the Migration Museum’s project director and first employee Sophie Henderson – a former immigration barrister and judge – first began working on the idea after she had visited Ellis Island in New York: a museum in the complex where immigrants were first processed before entering the United States.

“I found that quite inspiring and thought: where’s our migration museum?” she told me, when I interviewed her last year at the museum’s previous home in Lambeth.

Last November, the German government pledged €22.1m for a museum dedicated to migration, which should give the existing organisation DOMiD (Documentation Centre and Museum of Migration in Germany) – started up by Turkish immigrants to Germany in 1990 – its own site for the first time.

New migration museums across the world are popping up in response to the nationalist-populist wave. There are now over 20 spanning 15 different countries, and the majority “have opened within the last ten to 20 years – in terms of museum history, we’re talking very recently”, says Miller, who visited 22 museums across six countries last year.

“This museum couldn’t be more timely,” says Henderson, referring to the public attitudes tapped into by the EU referendum.

“As a nation we’re not very confident in our attitudes towards immigration, so we are susceptible to being whipped up; you can see that we are a population that can be manipulated on that topic,” she adds. “I think it would give us great confidence if we mainstreamed the story, if we internalised it [migration] as a value, that it’s actually part of who we are and that we should value that, and accept that we’re all part of it.”

The former president of the Tenement Museum, an old tenement block in New York’s Lower East Side, which explores working-class migrant history in the city, Kevin Jennings, struck a similar tone when I called him last year. “This is the Tenement Museum’s moment; we have never been more needed than we are right now.”

After a white supremacist killed 51 people at a mosque in Christchurch, New Zealand last March, Australian migration museums convened to address the issue (the shooter was Australian). An international network of migration museums met in Belgium, at the Red Star Line museum of emigration in Antwerp, a few months later to discuss ways to “promote our common agenda of reducing xenophobia and anti-immigrant prejudice”, according to Jennings.

While the Migration Museum in Britain has been establishing itself as part of this global trend, it has yet to find settled status. Lewisham shopping centre is now its home for a year, after which it will continue searching for a permanent space – and place in our national story.