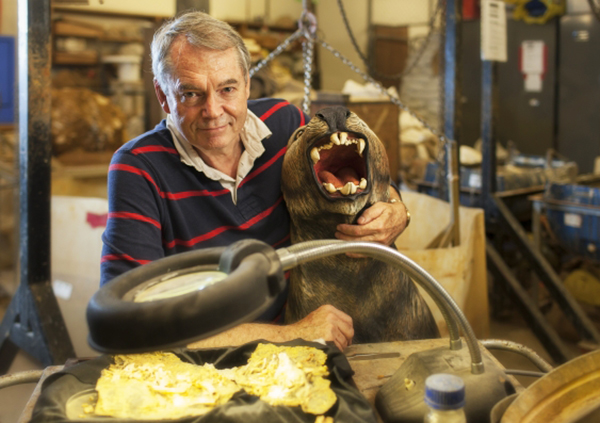 UNSW’s Professor Mike Archer is the first Australian to win the Society of Vertebrate Paleontology​’s highest prize, the Romer-Simpson Medal.

One of Australia’s foremost palaeontologists and environmentalists, UNSW Sydney’s Professor Mike Archer, was awarded the prestigious Romer-Simpson Medal at the Society of Vertebrate Paleontology’s annual meeting in Brisbane on Saturday. He is the first Australian to receive the honour.

Named after influential American palaeontologists A.S. Romer and G.G. Simpson, the award is given for lifetime achievement in sustained and outstanding excellence in vertebrate palaeontology.

Professor Archer, from the UNSW Science School of Biological, Earth and Environmental Sciences, is renowned for his commitment to conservation, protection of fossil sites, saving endangered living species and vast excavation at the World Heritage listed-Riversleigh area in remote north-western Queensland. With a team of experts from UNSW and around the world, Professor Archer has worked extensively at Riversleigh for more than 40 years, unearthing hundreds of Australian fossils including more than 40,000 specimens of 300 species in local deposits spanning the past 25 million years.

Professor Anusuya Chinsamy-Turan, Chair of the Romer-Simpson panel and palaeobiologist at the University of Cape Town, congratulated Professor Archer on his award.

“Professor Michael Archer has made an outstanding and lasting contribution to vertebrate palaeontology and especially to our understanding of Cenozoic Australasian marsupials,” Professor Chinsamy-Turan said. “His research has produced some 300 papers, many books and he has mentored more than 90 postgraduate students. He has a phenomenal record and is most deserving of our Society’s highest recognition.”

Decades committed to science and discovery

Professor Archer, who is also Director of the Vertebrate Palaeontology Lab in the PANGEA Research Centre at UNSW, said it was a privilege to be recognised by the Society for a career and life that has revolved around fossils.

“From the age of eleven I have been addicted to science and discovery,” said Professor Archer. “In palaeontology there is a high probability you will find something unexpected. It is completely thrilling. Palaeontologists don’t get the luxury of making predictions – it’s the unknown and unexpected that draws people in.”

His research focuses on the deep past such as the deposits at the 40 square kilometre Riversleigh, conservation through sustainable use of native resources including keeping native animals as pets, protecting endangered living species and trying to bring extinct species such as the thylacine and gastric-brooding frog back into existence.

Professor Archer is also the co-lead with UNSW’s Professor Suzanne Hand in the discovery of hundreds of fossils at Murgon in southeastern Queensland, a 55-million-year-old fossil deposit that documents animals present in Australia before it split from Antarctica 50 million years ago. Among other extraordinary finds at Murgon have been the world’s oldest songbirds.

“Murgon and Riversleigh are our passport to understanding how Australia became Australia. These sites help us understand Australian marsupial evolution and responses of populations to climate shifts. We have crises that are facing the world now – including mass extinction – and scientists, across all areas, need to devote good portion of research time to slow down or avert climate change.”

Professor Archer was previously Director of the Australian Museum and Dean of Science at UNSW. He has published extensively on a wide range of topics focused on the prehistory and conservation of many kinds of Australian animals from the Cretaceous to the present day.