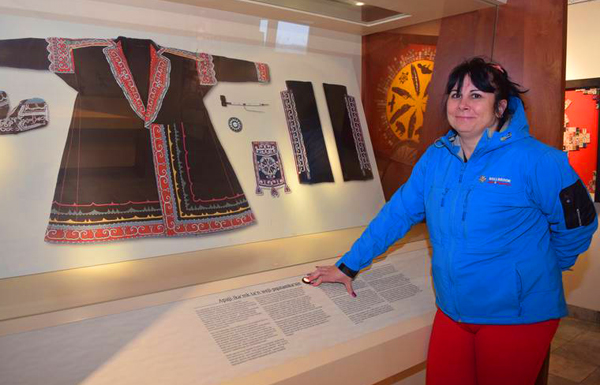 Heather Stevens, Operations supervisor at the Millbrook Culture and Heritage Centre, is a strong supporter of having Indigenous regalia repatriated to its traditional Mi’kmaq home in Nova Scotia. This display case houses photographs of Indigenous regalia dating to about the early 1840s. The actual collection is housed out of public sight in an Australian museum. Photo: Harry Sullivan.

Mi’kmaq artifacts created in Nova Scotia during the 1800s and now stored out of public’s view in an Australian museum, should be returned to the province, Bill Casey believes.

“It’s not on display and the people that could get the most value from it, I think, are the young Indigenous people,” said the Cumberland-Colchester MP.

Casey has introduced a private member’s bill in the House of Commons called the Aboriginal Cultural Property Repatriation Act.

The regalia in question includes a decorative robe/coat, a brooch used for fastening the front, leggings, moccasins, a pipe and a pouch.

“To know that somebody in their community wore that robe in the 1840s and now it’s stashed away where nobody can see it … it’s not on display, it’s just in safekeeping,” Casey said.

The items were purchased from an unknown Mi’kmaq community in Nova Scotia in the early 1840s by Samuel Huyghue, a British army officer whose wife, Isabella, was from Melbourne, Australia.

Huyghue emigrated to Australia in 1852 and when he died in 1892, he left his collection of Mi’kmaq artifacts to the Melbourne Museum, Victoria .

Life-size photos of the regalia are on display at the Millbrook Cultural and Heritage Centre. While checking out the display several months ago, Casey said he was astonished to learn of the status of the actual items.

So, when the rare opportunity arose last week for him to introduce a private member’s bill, Casey knew exactly what he wanted to do.

“The whole purpose of this bill is just to make sure everybody is aware of the importance of these artifacts and at every opportunity try to bring them back to their rightful owners,” he said. “This is just an incremental step. It’s a huge issue, I mean the Aboriginal artifacts from Canada are all over the planet and I just think we should be trying to bring them back.”

His hope is it will inspire governments, museums and collectors to reorient their thinking about traditional knowledge, to respect the different cultures and to work as equals with Indigenous peoples to ensure that cultural property is repatriated when possible.

Casey has received strong support from other MPs and the Mi’kmaq community, including Dr. Donald Julien, executive director of the Confederacy of Mainland Mi’kmaq.

“Repatriating Indigenous cultural property can have immeasurable positive psychological, educational and economic benefits for Indigenous communities,” Julien said, in a news release from Casey’s office. “We see a need for a national strategy that is sensitive to the differences among communities and cultures but that ultimately brings this issue to the forefront for all Canadians.”

For Heather Stevens, Operations supervisor at the Millbrook centre, the possibility of being able to display the actual regalia and to have the opportunity to talk about its meaning to the worldwide public would be “amazing.”

“There are no words really to explain how I would feel to have it back here,” she said. “It was created by one of our ancestors and to have it actually back to where it originally came from just gives us that connection again to our ancestors.”

Millbrook Chief Bob Gloade said efforts have been underway by Mi’kmaq officials for at least the past decade to have items housed at a Melbourne, Australia museum repatriated.

The Melbourne Museum does have a policy that provides for the repatriation of artifacts that are not directly related to Australian cultures. But the process is somewhat arduous and Gloade believes if MP Bill Casey’s bill is passed, it will make it much easier to have the artifacts returned to their rightful place of honour.

“It’s been a challenge,” Gloade said. “There’s a protocol that they wanted us to do to make sure it was properly secured and protected. So we’ve done all that.”

But he said federal legislation is also required to proceed with the initiative and hopefully Casey’s efforts will ease the process.

“It’s really important because it is a piece of clothing that is Mi’kmaq history,” Gloade said.