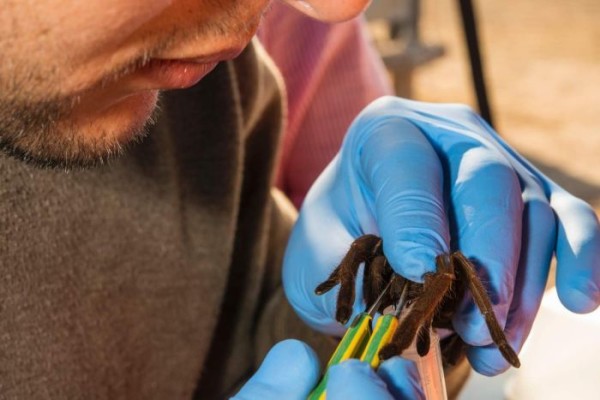 If you thought milking a cow was challenging, imagine trying to milk a tarantula.

Researchers at the University of Queensland and the Queensland Museum are doing just that in the hope the venom will lead to the identification of more tarantula species, and also to a range of potential medicinal applications.

Milking the tarantulas to extract the venom is a delicate process.

A light electric charge is applied to the fangs, causing the muscles to contract and discharge venom into a container.

Project supervisor and Queensland Museum arachnologist Dr Robert Raven hopes the results from their analysis will prove his suspicion that there are more species of Queensland tarantulas than previously thought.

This would have major ramifications for treating spider bite victims, and also would help identify which spiders are disappearing.

“The venom can be very easily played out and looked into as a pharmaceutical product for various things,” he said.

“One of the things that they were looking at a some years ago was the fact that the venom was actually binding to breast cancer cells and immobilising them, so that’s in development phase now apparently and they’re looking at other potential uses for the venom, such as pain control.

“We’re already getting clues that some of the things we’re looking at aren’t quite what we thought they were, and that’s pretty exciting.”