You are here: Home » Articles filed under: 'News' » Article: 'Min of Arts & Culture with multiculturalism'

Min of Arts & Culture with multiculturalism

May 9th, 2019 | Browse other: News. | Tagged with: Interview with MP Maria Vamvakinou, role of the Greek community in Australia | 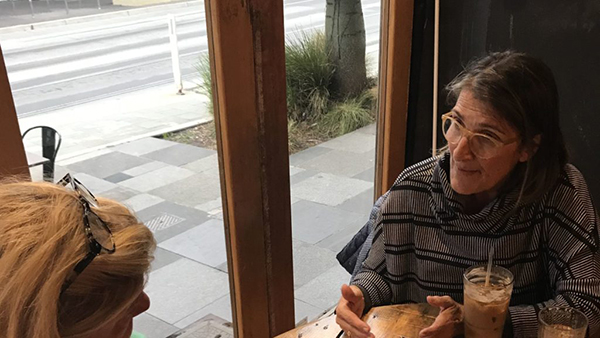 Maria Vamvakinou, member for Calwell talks to NK about her party’s commitment to the Greek community

Having served as the Federal Member of Parliament for 18 years, MP Maria Vamvakinou is regarded as a ‘gentle giant’ in the Australian Labor Party. Her consistent campaigning managed to win the trust and consequently the vote of 70 percent of her electorate in 2016. Since then, she has continued her work as a fierce advocate for the working class electorate of Calwell – a multicultural hub with a recent influx of refugees from Syria in the north-western suburbs of Melbourne.

An effective spokesperson for the Greek community in Canberra, she has crusaded for a number of issues and has worked alongside other Greek-Australian federal politicians to align Australia’s foreign policy with the needs of the diaspora on matters such as the Cyprus Occupation and the name dispute with the Former Yugoslav Republic of Macedonia.

When Vamvakinou says, “I am advocating for a Ministry of the Arts and Culture where multiculturalism will have a centre stage”, you know that she is fighting tooth and nail to make this happen – even if she has to go against the party line to do so, an attribute that is highly respected in her faction and her party.

With Labor policies in the areas of Health, Education and Climate Change widely spruiked, our conversation focused mostly on issues closer to the heart of the Greek Australian community.

Our conversation started from the Aged Pension and if a future Labor Government will increase the rate of it.

If we take away the financial pressures and help the pensioners with energy bills, with things such as dental, with pharmaceutical expenses, indirectly we are assisting them. It may not be called a rise in the pension, but it takes away additional financial pressures. So we are giving them $1,000 for two years for dental care, something that pensioners have advocated for, for years, and they are very pleased to receive it and the energy rebate that we forced the government to maintain. There is always room for more. Our announcements will keep on coming.

The Morrison government has announced that it will support with $5 million the Greek Community of Melbourne with $2,5 million going for the establishment of the Hellenic Chair in Global Diasporas in Melbourne University. Will Labor match it?

In a range of areas, around emergency relief, Pronia has been picking up all of the responsibility of servicing not only of our ageing community but also the newly-arrived Greeks. Given the importance of ‘Pronia’ and its decades-long service, it is one organisation that deserves to be supported strongly. So we’ve made a commitment that a Labor Government will, in the first instance, reinstate ‘Pronia’s’ emergency relief funding over a four-year period that was cut by the current Liberal government. That’s one major Greek organisation that needs to be supported and funded by the federal government.

Recently, we also committed $3 million to the Greek community in South Australia for the building of a much-needed nursing home. My point is that the Labor Party has already made commitments to Greek community organisations in Melbourne and in Adelaide. However, should we be approached by other Greek organisations, we ought to consider them on merit, and ensure that public funding is spread equitably across all areas of need throughout Australia. To do otherwise, would be an unfair and inefficient use of public funding. My interests and commitment rest with resourcing and supporting all Greek community organisations that offer a public service; whether this be in health, welfare, education, cultural heritage, and settlement – such as ‘Pronia’ and ‘Fronditha’ or any other community and religious organisation both in Victoria and in other states.

So as a Member of Parliament of Greek heritage, I can say that I support all requests for funding from Greek organisations based on the needs they address, their merits and their capacity to genuinely deliver.

There was an amazing push for the inclusion of the Greek language in the National Curriculum some years ago. While this happened, the Greek language is still strangling to find a space in the public school system. As a result of that if not immediate but very closely related the Modern Greek Language program in Latrobe here in Victoria is struggling too. Is a Labor government willing to do something about that?

Steve Georganas and I tabled in the House of Representatives one of the largest petitions of its time about the inclusion of the Greek language in the national curriculum. This was an example of our community’s determination to secure the long-term future of the teaching of the Greek language here in Australia. I agree with your observation that the Greek language although included in the national curriculum, is competing to find and to keep a place in the public school system. We have a situation, where on the one hand, for example, ‘Pronia’s’ bilingual early learning centre Alpha is teaching Greek to a large number of non-Greek background children and the ‘Speak Greek in March’ campaign is gathering momentum, meanwhile, on the other hand, La Trobe University’s Modern Greek language program is struggling to keep up its numbers. Addressing this should be our priority.

Our responsibility as the Labor Party, is to prioritise our public funding in those areas of genuine need and relevance across all communities including the Greek-Australian paroikia.
Will Labor tax us more?

A lot of my constituents and a lot of people understand what the game plan is. They do not mind paying a little bit more tax if it means that they can be guaranteed a good health system and access to it. I know the government is running with this scare campaign, they have their own ideological view on how the economy should work and that’s fair enough. We have our own principle which is fairness and equal opportunities.

Τhe Scanlon Foundation’s 2017 Mapping Social Cohesion Report last year, found that discrimination and bigotry is on the rise in Australia. This vile narrative has entered the public arena and it does not seem to dissipate. At the same time multiculturalism and the promotion of it is more fragmented than never before. The world multiculturalism is absent from the public sphere. Will a Labor government a natural defender of this founding set of ideals for our society consider the reinstatement of a body solely devoted to promote multiculturalism?

Because we aren’t talking about the Australian identity, you are right, that space, has been filled by the Pauline Hansons and the Fraser Annings of the world, giving rise to extreme views. We need to get back into that space and recapture the narrative around who is an Australian and what it means to be an Australian. I’ve come to the conclusion that we need to establish a Ministry of Arts and Culture, where we make multiculturalism the centrepiece. You see multiculturalism is not about the food that we eat and our costumes. It’s about in particular the post WWII migrant history of Australia and we need to find a place for that history. I think that our country has reached a stage and a maturity where it needs to find its cultural identity so that we won’t have to get caught up in stupid debates coming from stupid people such as Fraser Anning. We have to take ownership of this identity that we have helped build. Again it falls to the established communities, our community who had led the way in the ’70s, and ’80s. It is beyond just serving a souvlaki it’s about who the 3rd generation of Australian’s are, how they see themselves as Australians. I think that there is an openness of discussion for the establishment of this body.

Why should people vote for the Labor party?

The trickle-down effect of economics hasn’t worked. I am not trying to be an ideologue, but it hasn’t worked. And at some point someone has to step in. There are a whole lot of people that had been left behind and if we do that we are going to actually further burden our welfare bill. We need to ensure that people are able to look after themselves. I believe that our agenda is going to assist people in a way that the current government’s view doesn’t. That’s why I believe people should vote for the Labor party.