You are here: Home » Articles filed under: 'News' » Article: 'Mirka at the Jewish Museum of Australia'

Mirka at the Jewish Museum of Australia 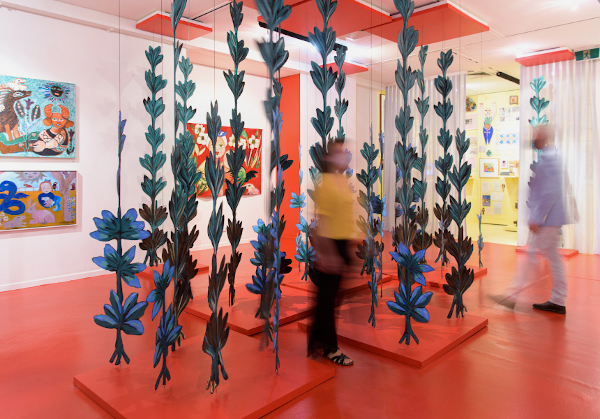 The exhibition goes beyond the artist’s paintings, highlighting never-shown works, historical mementos and drawings that’ll immerse you in the Melbourne icon’s world of art, food and famous friends. Plus, a soundscape that uses Mirka’s own voice will guide you through the space.

Drafter, painter, sculptor and mosaic-maker Mirka Mora passed away in 2018 at 90 years old. By that time her dream-like depictions of wide-eyed children, angels, birds and other animals had become iconic. She’s one of just a few Australian artists whose art practice is as respected on the established gallery circuit as it is on the street – from her painting of the very first Melbourne Art Tram in 1978 to her collaborations with local fashion label Gorman in 2016 and 2018.

And the Jewish Museum of Australia is hosting the largest survey of the artist’s life and work to date.

The exhibition is a “revelatory exploration” of Mirka’s life and art, and the museum has been transformed into an immersive “Mirka world”, according to the museum’s director. It’s collaborating closely with Mirka’s gallerist son, William Mora, on the project.

The exhibition showcases never-exhibited works from the Mora family’s private collections and Mirka’s studio and archives. Rather than just presenting the works of art – as many of the exhibitions held during Mirka’s lifetime did – this show connects the artist’s complex life experiences with her creative output. Her voice is present in numerous forms – letters, sketchbooks, diaries, video interviews and more. Audio artists Madeleine Flynn and Tim Humphrey were commissioned to create a soundscape that – using Mirka’s own voice – guides visitors through the space.

Born in Paris in 1928 to a Lithuanian Jewish father and a Romanian Jewish mother, Mirka was sent to a concentration camp at Pithiviers (south of Paris) in 1942, when she was 14. She was scheduled to be deported to Auschwitz, but, through the ingenuity of her parents, was miraculously released.

After the war Mirka met and married Georges Mora, another Jewish refugee, and together they emigrated to Melbourne. The pair became key figures in the city’s bohemian subculture during the ’50s and ’60s.

Not only did Georges establish what is now one of the longest-running commercial galleries in the country – Tolarno Galleries – but together he and Mirka ran some of the city’s most vibrant cafes and restaurants: Mirka Café, Balzac and Tolarno French Bistro.

The intersection of food and art to culture was part of a subculture Mirka and her circle helped create and energise. The show at the Jewish Museum takes you inside that world – and inside Mirka’s head – in a way that earlier exhibitions haven’t.

The exhibition also gives us a taste of a new era for the Jewish Museum – fresher and more contemporary, but still very much tied to the legacy of the organisation.