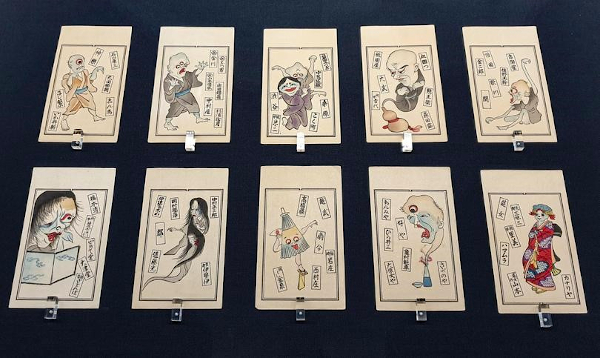 Will Yeoman, Mysterious museum in Miyoshi, The West Australian, 8 February 2021

I’m in a bus on the Chugoku Expressway. I’ve just left Hiroshima and am heading through the lushly vegetated mountains to the town of Miyoshi. I have a date with a monster.

Originally a fortified castle town, Miyoshi is rich in history and natural beauty. It also has a number of fine art and history museums, to which, in 2019, was added the Yumoto Koichi Memorial Japan Yokai Museum, or Miyoshi Mononoke Museum.

And it’s in the Miyoshi Mononoke Museum that I now find myself, suddenly immersed in the strange world of the yokai (monsters) and yurei (ghosts) of Japanese folklore and legend.

The c.5000 items that make up what is Japan’s largest Yokai collection (clearly, they are not all on display at the same time) were donated to the museum by the folklorist and Yokai researcher, Yumoto Koichi.

There are woodblock prints, paintings, scrolls, ceramics and items from popular culture such as toys and manga. There is an illustrated digital gallery that allows you to identify hundreds of yokai. There is even a digital role-playing game of sorts where you can recast yourself as a yokai before interacting with dozens of others on a huge screen. 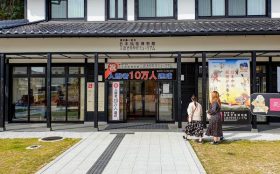 The centrepiece of the collection – and of the museum – is however the famous Ino Mononoke Roku scroll. The Ino Mononoke Roku is a supernatural story set in the Miyoshi of the Edo Period (1603-1868). It features the adventures of a real historical personage, Ino Budayu, who as a child was known as Heiraro.

For a whole month, young Heiraro experienced a series of strange encounters with yokai. It is these encounters that are depicted on the scroll, as well as on associated paraphernalia displayed nearby.

I have to admit I’m disturbed by the images I see. Not because they are especially frightening. It’s because they seem so alien to a non-Japanese visitor. In that sense, they are doubly strange. 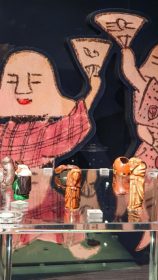 One of the colourful displays at the Miyoshi Mononoke Museum. Credit: Will Yeoman/The West Australian.

Take the kappa: imagine a frog with the body of a human, the shell of a tortoise and a little pond sunk into the top of their head. Apparently, they enjoy eating cucumber and challenging humans to sumo wrestling matches.

Or the Rokurokubi, a woman with a snakelike neck. Or the Tanuki, racoon-dogs with enormous scrotums which they can drape about themselves in all manner of ways. Or the Earth Spider. The Object Goblin. The long-nosed Raven Tengu.

All this being said, the images themselves are exquisite, many so delicately rendered on silk and subsequently faded as to seem even more mysterious.

But perhaps the strangest, spookiest and most mystifying thing of all is the bizarre English auto-translation (don’t you love ‘em?) of the Japanese text on the museum’s website. Here’s an excerpt, which I’ve put into the shape of a poem for greater effect. I have made no other changes.

This museum leaves
(I see, give up, soak,
give up and dote.)
Japan will be thankful deeply once more
that Tsuyoshi Yumoto
one who is an outstanding spectre collector.
(Ichi who also misses with YU.)
Though an accident by a natural phenomenon
and a pestilence feared
a phenomenon beyond human intelligence
as one which derives
from ghost (spectre)
and man sometimes respected
we were coexisting traditionally.
Japanese spectre exhibits
material related to a Japanese spectre,
how are spectres caught in our life
and whether it has been expressed.
You’re satisfied with the world of ghost
at a place by Miyoshi
also I should be very much obliged
if you can enjoy town walk
in a place by Ino monokairoku relation.