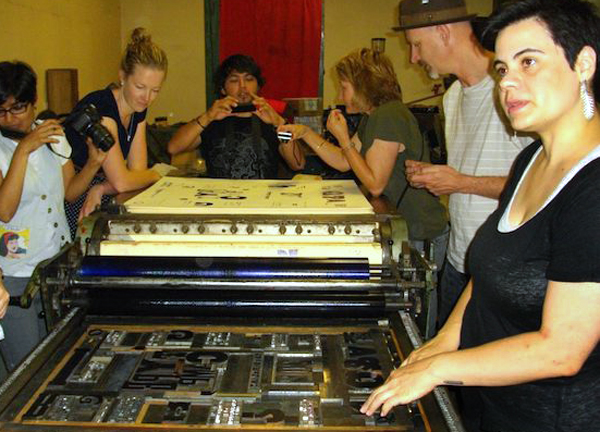 The Melbourne Museum of Printing, arguably the largest and most important repository of printing equipment in the country, is under threat. Last weekend, the Age blew the lid sky-high on an issue which has been festering for years – and which may have no easy answer. The positive response by members of the public reminds us that it DOES affect the printing industry – whether we like it or not.

Far, far away in a distant galaxy located in Melbourne’s West Footscray there exists, rightly or wrongly, and perhaps even inexplicably – the greatest collection of printing equipment (old and new), type-chases, boxes of metal-type and a veritable Aladdin’s Cave of print industry memorabilia.

This bizarre fact was brought to the nation’s attention this past Easter weekend, when Melbourne’s The Age newspaper devoted a large story (two-and-a-half pages and pictures) to the sad fate now befalling this collection. The problem, in a nutshell, is that the landlord is owed a considerable amount of rent, and wishes – putting it bluntly – to chuck the entire contents on the tip.

I only became aware of the problem a month ago when I was asked to explore what options there were for its salvation.

Could it continue, but in a smaller scale? If so, would it retain its role as a teaching institution (it used to hold workshops on letterpress printing)? Should there be a ruthless cull and retain only the old equipment in a static display? But where?

Would a Melbourne-based college (e.g., Holmesglen?) wish to wrap it into their facilities? Would an historic-themed site such as Sovereign Hill wish to incorporate into their heritage offer? Would a Victorian museum consider absorbing it – after all, it is a unique collection of historical equipment? Would an interstate museum consider taking it over – after all, it is, at heart a “national” treasure?

I must say, when I first heard about it – last month – I was overwhelmed by two emotions: guilt and admiration. Admiration for what the owner, Michael Isaachsen has managed to achieve – with apparently, very little help from anyone – be it governments who have stood by and not thrown in a cent – or our own industry, who, for whatever reason, has not more warmly embraced this project.

My admiration is tinged with a sense of guilt, however, that I – a fourth-gen member of the industry, who prides himself on ”knowing” about such things – had not the slightest clue about the size and scale of this collection. (To those uninitiated, visit www.mmop.org.au) – and be blown away by the impressive, multi-faceted range of equipment, memorabilia, not to mention training courses that were on offer).

Putting aside for one moment whether or not Michael is a bit … let’s say … “single-minded” about his collection, we must not forget that an institution (I’m calling it that for good reason) such as this, represents the heart and soul of our industry. It is the ticking grandfather clock in the hallway, which reminds us of where we came from and who we are.

It is an art gallery; it’s a working museum; it’s a training college (for everyone from housewives to graphic design students to lovers of letterpress); it’s a workshop, where tinkerers of times past can come and luxuriate in the wonders of yesteryear.

It’s a hallowed hall, housing sacred relics from a bygone era. It cannot be allowed to perish!

One hears of all sorts of bogus ”causes” getting 100s of millions of $$$s of government funding. We may recall the tertiary training-college scam of last year when lazy watchdogs handed out millions of $$$s to fake colleges – no questions asked!

One would like to think the MMOP would stand at the front of any queue in terms of ”worthiness”, if any such application was made.

Even putting aside that it represents an irreplaceable showcase of our industry, it is also a training college, and I would have thought that all governments (Federal and State) having made such a hash of TAFEs, would bend over backwards to help any institution (such as the MMOP) which offers a training component.

It is worthwhile to briefly back-track: what is all the more remarkable is that Michael, the founder/proprietor is NOT from the printing industry. His main occupation was in management roles within the Post Office. Somehow, imbued with a love of letterpress in particular and print in general, he scrimped, scrounged and fossicked around and eventually amassed a sizeable collection of printing equipment – plus Linotypes and other ancillary bits-and-pieces – to the point where he has created a veritable ”museum of printing” right under our noses!!!